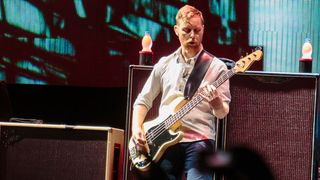 Nate Mendel, back on the bass earlier this year (Image credit: Mauricio Santana/Corbis)

Nate Mendel made his name playing bass for Sunny Day Real Estate and Foo Fighters, but recently he made the transition to guitar for his solo project Lieutenant U.S. We picked his brain to garner some tips for guitar players moving in the opposite direction....

Play with a pick

"I've always used a pick. I grew up listening to hardcore punk rock, and that was the only way to play fast enough.

"Obviously, you get a softer note when you play with your fingers, but that wasn't appropriate for that kind of music, so I learned to compensate when things need a softer, rounder sound."

Don't get too busy

"When we first started as a band, Dave would come in with a song and it'd be fairly simple because he likes to write things that way. I would start thinking, 'How do I make this interesting?'

"I didn't get that underpinning a vocal melody is what makes the song compelling. Now, I try to come in with more of an understated approach."

"Use what you use. I lucked out pretty early and got a nice P-Bass and a 70s [Ampeg] SVT, and I played that for years. In rock music, you want something that's going to create a solid tone at high volume. I think the instrument is less important than the amplifier, generally speaking."

Play with as many drummers as possible

"It's a very important relationship. I enjoy the difference [between drummers] - it keeps you on your feet. Taylor [Hawkins] is like a force of nature! He's really opinionated about the drums, I just work around him, so it's interesting to see what Dave does differently.

"I love playing with [former Foo Fighters drummer] William Goldsmith, too - he would alter what he was playing on the drums if I had a strong idea, and vice versa."