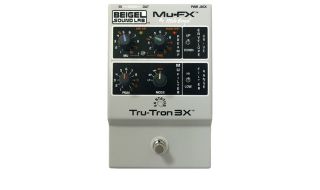 NAMM 2014: Mike Beigel, the man behind the sought-after Mu-Tron III envelope filter effect (popularised in the 70s by the likes of Bootsy Collins and Stevie Wonder) has unveiled an updated version of hismostprized stompbox, dubbed the Tru-Tron 3X.

Though he's since lost the rights to the Mu-Tron brand name, Beigel was the leading designer behind the pedal and also collaborated on Electro-Harmonix's Q-Tron take on his filter stompbox. Now he's back with a new stompbox that he says is the closest anyone has come to the original version. Check out the full press release below to find out more.

ENCINITAS, CA -- Mu-FX™ has introduced and is now shipping the Tru-Tron 3X™, first of the upgraded line Musitronics Corporation products to be released.

The Tru-Tron 3X™ is the authorized modern all-analog re-issue and refinement of the classic Mu-Tron III™ envelope controlled filter.

Mike Beigel, inventor/designer of the Mu-Tron III™ and co-founder of Musitronics Corp., has retained all the sonic mojo that made the 1972 unit so popular with Stevie Wonder, Jerry Garcia, Bootsy Collins, Larry Coryell, Frank Zappa, Carlos Santana, Joe Zawinul, George Duke and many more.

Made in USA, the Tru-Tron 3 has been refined with the following features:

The Tru-Tron 3X™ is the closest you'll find to the classic original Mu-Tron III, because at its heart—IT IS.

Currently available in the USA direct only from Mu-FX for $379.73 at www.mu-fx.com. Dealer inquiries welcome.

Other foreign dealers/distributors are invited to inquire.