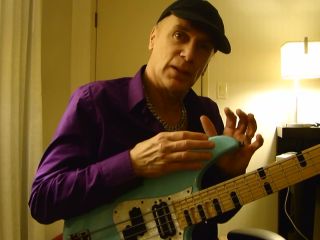 Aside from being a phenomenal bass talent, Billy easily has the skills to be a sales rep

NAMM 2011: Billy Sheehan finally had a few moments to kick back in his hotel room. The bass legend who is also one-fourth of the reunited Mr Big had spent most of the day signing autographs for hundreds of fans at the NAMM Show. After that, he soundchecked with a host of other notables for the Yamaha-sponsored All Star Guitar Night concert he would take part in later that night.

So what does Sheehan do when he's got some precious downtime? He talks about the bass, of course! His own bass, to be more precise - the Yamaha Billy Sheehan Attitude signature model. Sheehan had the prototype of the latest update to this remarkable instrument with him, to be called the Attitude III, and in the video above, he graciously talked us through its every feature. Trust us when we say this man not only plays the bass like few people on earth, but he knows more about equipment design and manufacturing than many folks in the industry.

A truly extraordinary walkthrough - and hey, you even get to hear him play! What can be better than that?