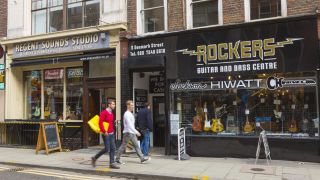 London's Denmark Street (AKA 'The British Tin Pan Alley') is due to undergo extensive redevelopment as part of a plan to rejuvenate the local area.

The street is home to the largest collection of music instrument shops in the UK capital and was the traditional base of several record companies - and their songwriters - in the '50s and '60s.

The likes of The Rolling Stones, Jimmy Page, Jimi Hendrix, Elton John and The Sex Pistols all cut their writing and/or recording teeth in buildings that line Denmark Street, while countless other greats have bought and sold gear in its guitar shops.

Now architectural practice Orms has been given the go-ahead to redevelop the surrounding area, aiming to "reinvigorate the area's fantastic music and cultural scene".

Key elements of the plan include a new 800-cap multi-purpose auditorium (to be positioned between the redeveloped Tottenham Court Road transport hub and Denmark Street), a hotel, new shop space, plus refurbishment of the street's historic facades.

"We are committed to creating a successful new quarter that enriches and integrates with the surrounding well-established neighbourhood, making it a vibrant community for people to work, meet and live, as well as a new, internationally recognised destination that London can be proud of.

"We want to create new homes for local people, invest in local shops and not only safeguard, but reinvigorate the area's fantastic music and cultural scene. The new events venue and restaurants will be carefully managed to ensure that they don't disrupt local residents.They meet an important need and will create additional jobs.

"We are very encouraged by the positive feedback we received at the public exhibition, particularly from the Denmark Street Traders' Association."

With the demolition of the popular Astoria and Mean Fiddler venues and disruption from the nearby Crossrail development, trading has been tough for Denmark Street's instrument retailers in recent years.

Development is due to kick-off in summer 2014 and could put further pressure on retailers in the short term. However, the arrival of a new music venue and the rejuvenation of the street's iconic frontage will likely be welcome news - especially if the planners stick to their promise of maintaining and protecting the area's special character and long-standing traders. Let's hope they do!