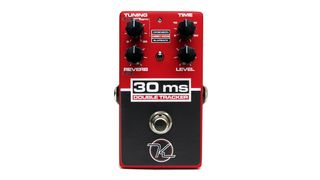 The pedal combines a reverb that aims to emulate Abbey Road's Studio Two and the doubling sound at the heart of the stompbox also draws its inspiration from that notable London studio.

There are three doubling modes, including a Dimension mode, which offers an altered/detuned chorus pedal-style effect; Abbey mode, which simulates synced tape decks on varying speeds; and Slapback, which is a double-tracked echo.

The 30ms Automatic Double Tracker is available now for $199. Head to the official Robert Keeley site for more information.

The stereo effect pedal offers an array of studio style doubling effects used for creating thicker, fuller sounding instruments. Also included in the effect pedal is a reverb that simulates the famous chamber in Studio Two. The Keeley 30ms is designed to work with guitar, bass, keyboard, even vocals.

"Since the early days of automatic double tracking pioneered by Ken Townsend and John Lennon at Abbey Road Studios, this technique has become the de facto way of creating recordings that sound bigger and fuller by making it sound like two guitars, or singers, or instrumentalists are playing at same time", said chief engineer Robert Keeley. "The 30ms offers musicians the ability to take these techniques with them out on the road with a wide range of tools needed for crafting unique double tracking schemes."

The Keeley Engineering 30ms Automatic Double Tracker pedal can be used in mono with a built in "Abbey Verb" reverb control, or in stereo as the Double Tracker Pro.

The 30ms offers altered and detuned effects like a chorus pedal might sound, only without the regularity of a LFO oscillator in Dimension Mode. In this mode you have the ability to create up to two different voices for a stereo double tracked field. The user controls the tuning and delay for results that are stunning mono or through two amplifiers in stereo.

Lastly the team at Keeley created a unique Slapback Mode for rockabilly sounds. The Slapback is now a double tracked echo with the two altered voices. Add the Keeley Abbey Verb to this mode to create really new effects.

In Stereo Double Tracker Pro mode the unit drops the reverb channel in favor of complete control over the double tracked voices. Each of the two voices can be tuned up to 30 cents sharp and flat.

Those voices are then delay by up to 30 milliseconds for subtle to very distinctive doubling sounds. The user can program by internal switches the wet output to have either dry and effected sounds, or just the effect, giving them true double tracking in stereo, live.

The Keeley 30ms Automatic Double Tracker is available from Keeley and dealers worldwide for $199.