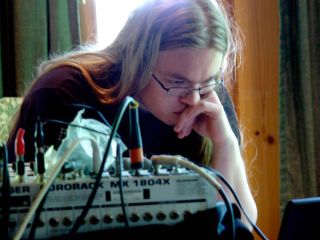 The face of the next guitar hero?

Stratovarius is a power metal band from Finland. Hugely popular in Europe, they have yet to achieve worldwide success. But all of that might change because of a young guitar phenom named Matias Kupiainen, who is already being hailed as the "new Steve Vai."

Stratovarius's previous guitarist, Timo Tolkki, quit the band earlier this year after a protracted period of mental illness (some of it institutionalized). For reasons unknown, Tolkki walked away, gave the band name and all song rights and future royalties to the group.

Enter Kupianinen, a 25-year-old native of Helsinki who has studied music theory and technology at the Sibelius Academy. Very Steve Vai influenced, his picking style is smooth and precise. He's already started working with the band on new material. An album is expected some time in 2009.

Check out Kupianinen on his YouTube video performing his own composition Hangover Shred.

What say you? The next Steve Vai?