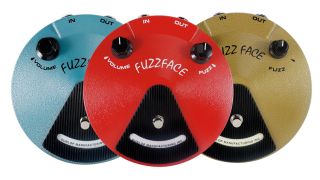 If it's good enough for Jimi...

The Fuzz Face is probably the most famous distortion pedal of all time, thanks to it spending so much time in the shadow of Jimi Hendrix´s velvet flares in the late 60s.

Jimi used an Olympic White Fender Stratocaster, Marshall ‘Plexi´ stacks and the happiest-looking stompbox ever to create aural napalm, and tone junkies have been pursuing that sound ever since.

The Fuzz Face was launched by Arbiter in 1966. The company - headed by the late Ivor Arbiter - was the first British distributor of Fender guitars, basses and amps. Apparently, Ivor himself came up with the Fuzz Face´s unique footprint, inspired by a mic stand with a circular base.

The pedal´s grinning face features volume and fuzz control eyeballs, an on/off switch nose, a rubber footpad beard and a curved branding-strip mouth. Over the years, that strip has borne various names, including Arbiter-England, CBS/Arbiter Ltd and, for the past two decades, Dunlop Manufacturing Inc.

Unfortunately, germanium transistors are sensitive to heat, which altered the tone or even caused the pedal to cut out completely. In the late 60s, Arbiter switched to more stable silicon transistors (often a BC108-stamped item), which solved the reliability issues but produced a harsher tone - not that it prevented Jimi making magic with his silicon-driven Fuzz Faces.

Dunlop Manufacturing reissued the Fuzz Face in 1993, but the quality of the fuzz tone varied widely, from fizzy to downright awful. You can build your own Fuzz Face (there are only 11 electronic components in the circuit), but Dunlop now offers four models that nail the classic fuzz tone: the germanium-loaded Dallas-Arbiter JDF2 Fuzz Face, the BC108 silicon transistor-driven Jimi Hendrix JHF1 Fuzz Face, and two versions designed in conjunction with legendary tonechasers - Eric Johnson´s EJF1 Fuzz Face and Joe Bonamassa´s thick-sounding, copper- coloured JBF3 germanium fuzz bomb. All are guaranteed to put a smile on your face.