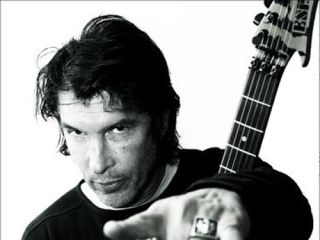 "Don't call me a 'shredder,'" says guitar monster George Lynch, whose fret-burning chops in the band Dokken made him a reluctant '80s hair metal star. "I was into playing cool guitar, for sure. But everything else was window dressing. There's so much I wish I could redo about that period."

Like working with singer Don Dokken, for one. In the following interview with MusicRadar, Lynch, who recently agreed to what he thought would be another in a series of long-promised Dokken reunions, only to find out that it was nothing of the sort, doesn't hold back when it comes to the vocalist he refers to as "a pathological liar."

Currently leading his own bands, Lynch Mob and Souls Of We, the guitarist has just released a new album, Kill All Control, which sees him working with a variety of lead singers - not his choice, as he explains - and dishing out the furious instrumental Son Of Scary, a follow-up to his signature piece, Mr Scary, from 1987. "I was a little nervous doing a sequel to something I'm so identified with," he says. "But one day I realized, it's now or never, and I'm not getting any younger. I might as well do it and call it what it is."

Kill All Control is a most solid record. You must be pretty psyched.

"I'm getting good feedback on it, yeah. I've done so many albums that it's hard to tell sometimes how that's going to translate. Back in the day, records sold because they sold. If you had something of a name, you were guaranteed X number of sales. It's a different day now. The record business is gone. You can have an amazing album, and it might do nothing.

"One thing the downsizing of sales and the music business has done is, it's shifted my focus to making music purely for making music. Now I'm no longer a product. I have nothing to lose. I'm not going to sell a million records out of the box or have a hit single, so I might as well make the kind of record I can really be proud of.

"What's a drag is, I spent very little time writing this new album. Originally, it was supposed to be the second record with my group Souls Of We [which also includes Adrian Ost on drums and Nick Speck on bass]. We wrote everything in ten days, recorded the tracks and then we ran into singer problems. My regular vocalist, London LeGrand [from Brides Of Destruction] had some trouble, and he had to bow out for a while. And then I became unhappy with the writing. This whole record was supposed to be fast, and it wound up taking two years.

"In the end, I used a few singers. I have Will Marten [Earshot], Marq Torien [Bulletboys] and Keith St. John [Montrose]. It was a pain shuffling around all these different tracks, rewriting things, getting in multiple singers. But the record's still great, so that's all that matters. And London came back, which is great. I would've liked a little band cohesion, though. My whole life seems to be ruled by lead singer problems."

We'll get to more of that in a minute. First, let's talk about the whole shred guitar scene, which you mentioned earlier. So, were you ever comfortable being called a 'shredder'?

"No. Not at all. I grew up playing blues music, jazz and classical. Then I was raised on 'The Four Horsemen' - Hendrix, Clapton, Beck and Page. In the '80s, I got caught up in the shred world, yes. It became a race of technique, and I had to play along to get noticed. There were a couple of cool players around at the time, but I didn't have their level of enthusiasm for the genre and the sport of speed guitar.

"As far as being a shred guitarist, I was never one of the pack. The shred thing was pretty silly. I was faking it. I wore the clothes and did the hair and all that, but my heart wasn't into it. I remember being in the studio with Dokken, and there was a guitar part that needed some heat. I had nothing. So I looked at a guitar magazine and there was this lesson by Yngwie Malmsteen. I studied that for five minutes and then said, 'OK, I'm ready!'" [laughs]

"I sure hope that people today don't consider me a shred guitarist. You know, the other day I jammed with Marco Mendoza and Allan Holdsworth's drummer. I mean, these guys are amazing! We did all of these prog-rock and jazz-type stuff. They couldn't believe I could hold my own playing music that wasn't considered heavy metal."

There's some pretty great solos on the new record. How extensively do you work them out in demoing?

"Not very much. I think there were only two times I ever pre-planned solos. The song Tooth And Nail was pre-conceived, and maybe a few more. The rest of the time, I'm a total shoot-from-the-hip guy. I like sitting in the control room and hearing the track played back. Then I let it rip. It could be the on first take, it could be on the hundredth. Either way, I always keep it fresh."

The song Voices In My Head sounds a bit like Alice In Chains' Check My Brain. The bends you're doing on the main riff are very similar to what Jerry Cantrell plays on that track.

"Well, that's because I wrote the song with Jerry! [laughs] No accident there. It's a very simple bend; it's not tape manipulation or anything. You just bend the string up a half step and you're there. Yeah, the Alice In Chains reference is fairly intentional. Everybody loves Alice."

Were you a fan of grunge? After all, grunge killed off a lot of hair metal bands in the early '90s.

"That's the process of evolution. You have to destroy things to create things. It was painful for me at the time, but a lot of the bands of my ilk were pretty stupid and terrible. They were superficial, had dumb lyrics, they looked silly, and they were just a vehicle for a lot of terrible guitar solos. Playing a lot of notes and saying nothing is totally ridiculous. Even when I played a lot of notes, I tried to make them mean something - at least, that was my goal.

"See, I came of age in the '60s, when music was a real cultural and political force. The bands said important things and stood for change. The messages were powerful. With hair metal, there was none of that. So yeah, grunge was great. It was as important as '60s music in that it signaled a change in direction. I hope people see that I have that same sort of spirit in what I'm doing now."

What's the latest between you and Don Dokken. I take it you're still feuding?

"Here's what happened recently: For many years, I championed the idea of doing a reunion. Not out of desperation, of course, which Don has said was my motivation. Of course, we could make money, too, but that's cool. The bottom line is, it would be closure. We could finally put a bookend to this thing called Dokken. I'd spoken to Don on a number of occasions, and he'd sort of play along and agree to things, but after a while it became apparent that he wanted to do a bait-and-switch thing. He wanted me along as a work-for-hire guitarist, which I'm not. So, basically, my attitude is one big 'Fuck you.'

"There were a couple of episodes of late, this failed reunion thing on the Eddie Trunk show. It was supposed to happen, and everything would be equitable. Plus, in order to do that, we'd have to pull [bassist] Jeff [Pilson] out of Foreigner, pull [drummer] Mick [Brown] out of Ted Nugent, and it would be all for one, one for all. Don lied, man. He indicated that this would happen, and he lied. So it's like, screw him.

"Don's motivation for talking about a reunion was that it would put him back on the radar. He plays shows, letting people believe there's going to be a reunion. Crowds show up, and there's no reunion. I don't want to dupe people like that, but apparently he doesn't care. This pisses me off so much."

Were you and Don ever really friends?

"Uh…there were some brief moments when we were both happy about a record doing well or a show doing OK. But friends?...I don't think so. The tyrannical lead singer syndrome would enter the equation every single time. You can't be friends with a pathological liar, and that's what Don is. He's a total liar. He says I didn't play on records that I absolutely played on, no question. What a stupid… He's into deceit. He throws people under the bus. What a lack of character, you know?"

Given all that's happened, could you ever get back together with him?

"I'm a realist. Plumbers have to work for people they don't like, people in offices have to work for people they don't like. I get it. Could I get on the stage with that guy and play with him again? You know…as long as the understanding of the situation is straight. Could I ever be in the studio with him? We were hardly ever in the studio at the same time anyway. But he'll never agree to equal terms, so this is idle chatter."

Was there a time that the band was ever happy?

"Being in Dokken was like being in a bad marriage. We got our gold record, got to go to Grammys. We'd get out of limos, drunk and with a bag of cocaine… You know, it was what it was. It was the '80s. Were we happy? The core band was. But we always dreamed of getting a real lead singer."