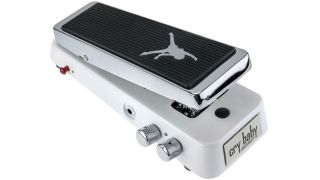 Jim Dunlop has made a raft of signature Cry Baby wahs for everyone from Buddy Guy to Eddie Van Halen, and now The Cult's Billy Duffy has made his mark on the legendary pedal by cramming two wahs in one enclosure.

Designed to visually complement the Gretsch guitars with which Duffy is synonymous, the BD95 offers a choice of modern and classic sounds, selectable via a kickswitch on the side of the pedal, with an LED indicator to show which is active.

The 95Q mode utilises the same inductor as the 95Q Cry Baby, as well as its volume and Q controls, while activating the Vintage mode brings in a warm, low Q inductor based on Duffy's favourite vintage Cry Baby pedals - the man's silhouetted logo also adorns the wah's rubber tread.

Like the 95Q, the BD95 packs auto-return switching - take your foot off and the wah switches off - and its bypass delay can be adjusted via an internal control, while internal controls are also available to adjust the toe-down frequency of both wah modes.