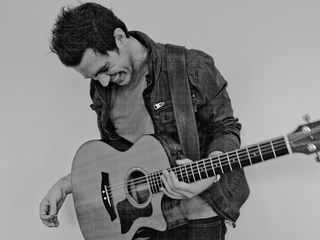 Busking vet Andy Grammer has some advice for street musicians

Busking, or street performance, is frequently looked down upon in today's society, but many popular artists actually started their careers in the public open-air - KT Tunstall, Tracy Chapman and the Violent Femmes are but a few examples.

Add to that list Andy Grammer, a dedicated street musician who honed his chops on the Third Street Promenade in Santa Monica, California. Grammer recently performed on The Tonight Show with Jay Leno and shared stages with Taylor Swift and Colbie Caillat. He's watching his debut single, Keep Your Head Up, go past gold on its way to platinum, status. Still, outside is where it all started began for Grammer, and he's giving like-minded artists some sage advice.

A few days ago, Grammer began tweeting his Top 10 tips for buskers, the first three of which are:

#10 - Its not them its u:) Listen to what crowds tell u.If CDs arent selling switch up ur show.Its a great focus group!

#9 - Get there early.The best spots go fast.U might have to hold a spot for up to 4 hrs.Its usually 1st come 1st serve.

#8 - Dont beg.U will make more in the end creating demand based on quality.Begging sucks the magic out of the experience.

As you might have guessed, there will be a new tip each day until we get to number one. Hey, it worked for KT, Tracy Chapman and the Violent Femmes - it can work for you! Follow Andy Grammer on Twitter.