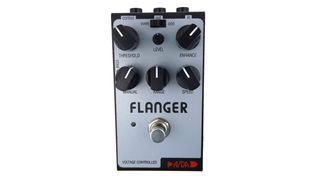 Long heralded as one of the greatest flanger pedals of all time since its introduction in the late '70s, the A/DA Flanger is a stone-cold classic - and it just got a whole lot smaller with the introduction of the PBF (PedalBoard Friendly) Flanger.

Like the pedal's 2009 reissue, the PBF Flanger features controls for threshold (to adjust the built-in noise gate), enhance, manual, range, speed and harmonics, but adds a bass voicing switch for bass players, as well as an output level control.

In addition to compatibility with most expression pedals, the PBF Flanger can be powered by standard 9 to 12V DC power supplies - unlike the reissue's 18V.