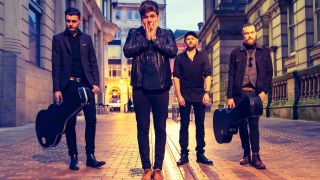 They may be a new name, but Broken Witt Rebels are already a well-oiled machine. The band's new EP, Georgia Pine, is all about big, chunky guitar tones and rootsy riff-led swagger, amplified by frontman Danny Core's fervent vocal delivery, which recalls the urgency of early Kings Of Leon.

Throughout the five-track release, lead guitarist James Tranter plants his fingers firmly in Southern-rooted solos and licks that are so authentic, you'd expect them to come from Birmingham, Alabama, not Birmingham, UK. Here, James gives us the lowdown on lusted-after guitars and dirty birds…

"My first guitar was a cheap Fender acoustic, which was given to me by a family friend. I got it when I was about 10 years old and spent countless hours playing it. In fact, I still have it at home and play it regularly. It's been battered and bruised over the years, but still sounds great and has a huge sentimental importance.

"I actually wrote a lot of the chord structures and riffs to a number of Broken Witt Rebels songs using it, and still do to this day!"

"It would have to be my Epiphone Casino. Not the greatest guitar in the world, but it's so important to me. Over the years, I became accustomed to using just one guitar live, the Epiphone! Furthermore, it's a signature part of the Broken Witt Rebels setup, and the group wouldn't be the same without it."

"My Gretsch, which I sold a few a few years ago on eBay. Not the easiest instrument to play - and extremely hard to reach past the 12th fret - but it looked beautiful and sounded even better.

"However, it taught me an important lesson: you can never have too many guitars, and no matter what financial situation you're in, you should never sell a guitar, because you'll regret it at some point down the line."

"For about six months, I've been after a Gibson ES-345 with Maestro vibrato; however, I'm yet to find the perfect one for me. I don't believe in buying a guitar for the sake of it - it has to be right for me, especially when there's a lot of money involved. Hopefully, soon one will jump out at me. I'm still checking local music shops regularly as well as online."

"I'd like to improve my fingerpicking techniques. Recently, I've been taking inspiration from Fleetwood Mac's Lindsey Buckingham (particularly from his songs Never Going Back and the acoustic version of Big Love). I'm inspired by how he plays three different guitar parts on one guitar - it's genius. I'm definitely improving, but there's still a long way to go."

"Before I go on stage, I tune my guitar religiously for a few minutes - there's nothing worse than playing the first note to our new single Low on an out-of-tune guitar. After that, I'll make sure I have three guitar picks on me (two in my pocket and one in my hand) before necking a pint to relax myself."

"Along with the rest of the band, I like to go into the crowd to say thanks to everyone for coming. We're not one of those bands who believe in hanging around backstage because we think we're better than everyone else - we love to have a good chat with everyone who's taken the time to come and watch us play. The Rebel fans are the best fans in the world!"

"It would have to be my latest purchase, my Gibson J-200 acoustic. So far, I haven't had much time to play it, so would love to dedicate more time to such an amazing guitar."

"When Broken Witt Rebels first started gigging, we played outside at a small festival. After about five minutes of playing I realised that a bird had shat on my head. When I say 'bird', I mean one that flies, not a crazy fan… that story is for another day!"

"Anyway, they say that's supposed to be good luck, and I suppose it was, because we played an amazing set. Thanks, bird!"

"Practise a wider range of chords and scales daily - you can never know too much. Also, keep at it always, because you're going to be all right."

Broken Witt Rebels release their 5-track EP Georgia Pine, featuring Low, on 15 April. The band are on tour in the UK in April and May.

Head over to Broken Witt Rebels for more info.