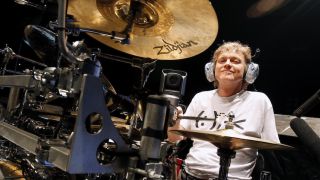 The sixth of seven singles from the world-conquering Hysteria album, Rocket was what Rick Allen describes as a 'surprise underground hit.' Here, Allen looks back on recording the track.

"It was recorded in Wisseloord studios, just outside of Hilversum in The Netherlands. It started out as an idea that Joe (Elliot, vocals) came up with - it was actually from a Burundi Black song. That was where the original loop came from.

"We just enhanced that theme and Joe and Mutt (Lange, producer) came up with the idea of making it a tribute to the '70s, and '70s bands, so we went on that theme."

"I remember we were on tour in England at the time, and somebody put it on through the PA system. I was completely blown away. I'd never heard anything like it in my life. We had worked on the record (Hysteria) for nearly three years, so I guess if it hadn't sounded good I would have been disappointed!

"Just the power, the sheer power blew me away. It was like, 'What a great song!'. To this day people love that song. I could have mentioned the obvious songs like 'Pour Some Sugar On Me', 'Rock Of Ages' and 'Promises' but 'Rocket' was a surprise underground hit.

"It's really fun to play, not necessarily drum- heavy but pretty challenging and I love to feel an audience give in to the whole experience."

How did you approach the track? What made you play the part you the way you did?

"The original idea from the Burundi Black song was very African, very tribal. We basically wanted the track to sound as though an entire village were out there playing, so as you can imagine there were a lot of overdubs.

"And it wasn't always a good thing when everything was played perfectly in time, it sounded more authentic when we had people involved just playing freely."

What set-up were you using at the time?

"The set-up I was using at the time was built by Simmons, it was an electronic kit, an SPS7 I think. I would also use acoustic drums - that's where I came from so I can never get too far away from that.

"We mapped the song using a Lin Drum, then we went from using a Lin Drum to a Fairlight, and from a Fairlight to a St Clavier, so it was a hybrid of machines and the Simmons kit and acoustic sounds. It incorporated everything, really."

Which recording are you most proud of?

"I really liked the stuff we did with Marty Fredrickson on the X album. I really enjoyed doing Slang too. Slang was a really fun way to record.

"I'm proud of all of them though, every record tends to bring out different things in you, and it depends on what you're trying to achieve on a record. But those two albums in particular I find really satisfying."