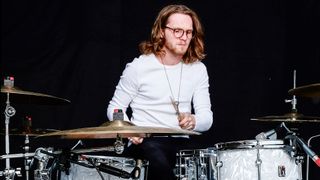 With a sound that falls somewhere between the dark indie melodies of The Smiths and Depeche Mode's synthpop stylings, it's little wonder that Blossoms are winning plaudits by the bucketload.

First they earned a place on the BBC's Sound of 2016 and then they were handpicked to open Kasabian's huge summer stadium shows. We tracked down drummer Joe Donovan to get the lowdown.

What was your introduction into drumming?

"My uncle was a drummer and gave me my first kit. I played it for about a month before getting told off for making too much noise."

"John Bonham is definitely one of my heroes, as well as Pete Salisbury, Mike Joyce and Ian Matthews. They are people who have helped me out in some way and been really good to me. I look up to all of them."

"It was a Premier Olympic from the '80s and I still have it in our practice room."

How did you come to be involved with Blossoms?

"Well I've known Tom [Odgen, singer] for 13 years and he's always been writing songs and been in bands. Then he started writing some new stuff and showed it to me so I got me him and Charlie [Salt, bass] together then we formed Blossoms."

How would you describe your playing style?

"My playing style is pretty solid I'm a one fill a song guy. I like that solid R'n'B drum style. A good solid drum beat is my think not really a 20 minute drum solo."

How did you become a British Drum Company artist?

"Pete Salisbury took me to see Keith [Keough, British Drum Company master builder] once and I was blown away by his work and we just kept in contact. I adore the drums, how they look, how the sound they're a really good to work with as well."

What kit/set-up do you use?

Are there any tracks from Blossoms' debut album that you're proudest of from a drumming perspective?

"I love Deep Grass it's a really chilled out song that I love playing. It isn't anything fancy or anything just really nice to play together. But from a drum side of things it's At Most A Kiss that's fun to play."

What is the one piece of gear you could not live without?

"My A Custom EFX cymbal. I love that thing and was the main cymbal used on the album, that and my kit it's self I really love it."

What has been the highlight of your career to date?

"I think selling out the Albert Hall in Manchester was the highlight so far, one of them mad moments where you pinch yourself and be like what is going on!"

What is coming up for the band?

"We have the album out now and loads and loads of festivals we can't wait for everything. It's all really exciting."