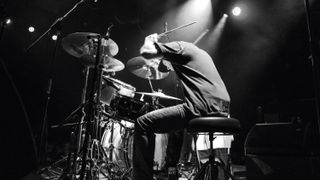 Influential American punk outfit Jawbreaker – consisting of lead vocalist and guitarist Blake Schwarzenbach, bassist Chris Bauermeister, and drummer Adam Pfahler – are back this year for the first time since the 90s. We caught up with drummer Pfahler for a quick chat.

You’re playing your first UK date in 25 years at Brixton Academy in April, do you remember the last time?

“It’s been ages! I think our last show in the UK was Halloween 1994. We had a run of shows, and one was with New Bomb Turks who were all the rage at the time. When we started booking these new shows people were commenting on the posts about seeing us with them.”

“I opened up a shop and started a family and did all those grown-up things, but I never stopped playing. I played in a bunch of bands: Strawman, The Moons, I played with my sister’s band – The Voluptuous Horror Of Karen Black.

“I played in a band with Richard from Versus, his side-project was called Whysall Lane, and I was in a band called California with Jason White from Green Day. So I’ve been around, I’ve just been knocking around in these bands that aren’t popular! I’m stoked that I kept with it.”

You were cited as an influence by a lot of punk/post-hardcore bands after you split, how did that feel?

“It was weird to see the band get more popular in the wake of us breaking up. People started telling me about these other groups who were coming up who would namecheck us.

“It was surreal and gratifying, but I didn’t really listen to a lot of those groups. There were some that were good and some that were bad, but I always tell people we don’t take credit or blame for what came after us!”

How has it been picking the songs back up?

“I own our catalogue, so when the 20th anniversary of our records came up I jumped back into the master tapes and remastered them. So I was always curating this band afterwards, getting our records back and re-releasing them meant that I was never really too far away from the band.

“Drum-wise there was some stuff when we got back at it where I was like, ‘Wow, s**t!’ The physicality is quite intense. There’s a kick drum thing I do on a song called ‘Accident Prone’, which is just relentless and I was like, ‘How the hell did I do that?’ I had to train myself and get back into shape to play that way.

“It had everything to do with the ergonomics of how high I was sitting and where my foot was on the pedal. I had to figure it out. It’s the p**s and vinegar of youth that made me play that way! I think being in a three-piece, you have to be careful not to over play. I finally figured that out about halfway into Jawbreaker’s band life!”

You’ve spoken about making new music. Is that in progress?

“Yeah, absolutely. We’re writing right now and we’ve rescued a couple of old songs that we never had a chance to record right at the end of the band. We’re going to get together in San Francisco and get right back to it. We don’t have a label yet, and we haven’t booked any studio time. We’re just dipping our toes and taking it one step at a time.”

Has your gear changed?

“It’s the same as it was, I use a four-piece. I’ve always played Ludwig, the Classic Maple shells. My original kit was a 1966 Ludwig with Marine Pearl wraps. I lost one of them in a robbery, but I still have the kick drum and the floor tom. So I’m playing that exact looking kit, maybe just a bit bigger.

“I’ve got a 24" kick drum, 18" floor tom and 14" rack tom, and I’m playing one of those Black Magic snares, like a Black Beauty, but it’s 8" deep so it’s got a really rich, boomy sound. I’m still playing Paiste and using Remo too. Except now I have a sponsorship so it’s easier on my pockets!”