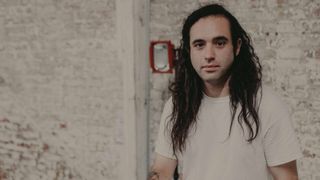 In recent years, the post-hardcore-meets-punk scene has been rising at a meteoric rate, and California’s Movements are on target to be the next big name to emerge.

As the band gear up for their first visit to UK shores, in support of Knuckle Puck, we pinned down Ira to hear his thoughts on his gear journey thus far and treading the ’boards - quite literally…

“A red Squier Stratocaster. It came in one of those beginner packs with the mini Fender amp. I drew a chequered design on the pickguard with a sharpie, haha! That was about 13 years ago.”

“My Clockwork Telecaster made by a company called 13th Street Guitars in Huntington Beach, California. One of a kind. I would risk my life saving that guitar.”

“JHS Panther Cub analog delay. This pedal is my secret for everything I do. It is one of the very few analog delays that has a tap tempo on it and it has the most unique-sounding Decay knob you’ve ever heard. I use that effect more than anything on our new record, Feel Something.”

“Honestly, there isn’t. I spend a long time thinking about what I want to change regarding my sound, and whatever I get rid of has been thoroughly thought-out. I will say this is the happiest I have ever been with my gear and tones.”

“I’m set on guitars and amps at the moment, but I’m addicted to pedals. I am particularly interested in another reverb pedal with some crazy modulation on it. I have two on my ’board right now: The Strymon Flint and the EHX Holy Grail. Both are amazing reverbs and very different from each other but I want to add one that can give me some of that crazy modulation/decay to complement it. Haven’t found what I’m looking for yet, so if anyone has any suggestions, hit me up!”

“I’m not a guitar aficionado and don’t know theory too well but I like those jazzy, dark minor chords. You know, the ones that make you feel something.”

“I would say improv playing. I am great at sitting down and writing a song on guitar and being able to play with structure. Taking the time to make every riff feel how I want it to sound, but actually just jamming and improvising is a little more difficult for me. I can do it, but it’s not my forte.”

“Chad Sterenberg from La Dispute. I don’t have a lot of influences on guitar, but he is definitely one of them. His style is so unique, being able to make clean tones and jazzy chords sound so damn heavy. He writes my favourite riffs of all time. The riff master.”

“I’ve had everything bad happen to me on stage before! Broken strings, blown tubes, blown speakers, broken straps, kids knocking my guitar out of tune during songs. Though I would have to say my favourite worst thing that happened to me is from Warped Tour this last summer. My guitar kept cutting out here and there during one of our sets.

“At one point during the set, it cut out for a good five seconds. I didn’t know what to do because we were in the middle of a song, so I decided to kick my pedalboard really, really hard and everything was magically perfect after that. I still can’t believe that actually worked!”

“I would say to get into pedals and effects way earlier than I did. I was so against it for so long and I have no idea why. They help you take your writing and general guitar playing to another level. Each pedal makes you play differently and really makes you step outside the box. It’s funny when you look back on certain things you felt strongly about and realising now about how dumb you were.”

Movements tour the UK with Knuckle Puck in December: