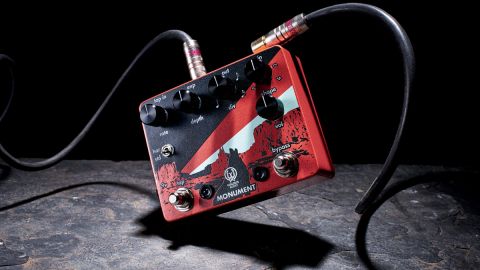 A practical pedal offering an excellent variety of sonic options with the bonus of plenty of expressive control.

Tremolo in its traditional place, built into a vintage or vintage-style amp, is a pretty basic effect.

With a fixed waveform controlled by speed and depth knobs you can pretty much set and forget, just turning on the tremolo when needed. Pedal designers, though, rarely stick to this format, instead offering ever wider-ranging facilities both to increase the sonic options and player functionality.

Such an approach is typified by the new Walrus Monument, which not only offers two distinct types of tremolo but adds adjustable waveforms, tap tempo with timing divisions, momentary operation and the option of plugging in an expression pedal to control the tremolo rate (speed).

Besides the familiar standard tremolo, the Monument offers Harmonic tremolo, based on that rarer take on the effect as found on Fender ‘brownface’ amps. Its method of modulating low-pass and high-pass versions of your guitar signal opposite each other offers a nice alternative trem flavour with a touch of phase-shifting going on.

On certain settings that phasing element comes to the fore, not unlike Univibe-type sounds. With either type of trem there’s a choice of five waveforms with Sine, Square and Ramp (sawtooth) offering the familiar, while Lumps is a gentle alternative to Sine, and Monument offers more random up-and-down-ery, supposedly reflecting the cowboy-movie mesa and butte scenery of Monument Valley after which the pedal is named.

The tap tempo function is useful to call up rhythmic effects right in time with your song, handy if you’re using the on/off square wave stutter (especially striking in short bursts achieved by holding down the Bypasss footswitch). It’s a great feature that allows you to texturise single phrases in your playing by adding expressive bits of tremolo at will.

There’s extra headroom in the volume knob too, so not only can you set a level to keep the tremolo prominent, but you can also use it as a pure clean boost with trem depth at minimum.