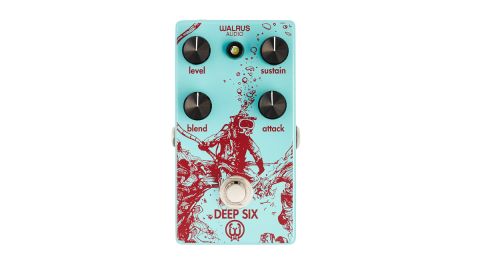 Quality and versatile compression that’s delivered in a functional format.

Walrus Audio says that its Deep Six is an 1176-inspired studio-grade compressor in stompbox form.

The range of compression here runs from just keeping levels consistent to a pretty heavy clamped-down squash, not dissimilar to that achieved by an MXR Dyna Comp.

The Deep Six, however, is much more versatile than that type of two-knob compressor in that, besides the standard controls to set the output level and the Sustain knob for the strength of the compression, it has an Attack knob.

This sets how quickly the compression kicks in, allowing shaping of the front-end of the note envelope, while also having a notable effect on the top-end tonal content under heavy compression.

There’s also a Blend control, so you don’t have to have the full signal compressed but can create parallel blends, keeping a more natural guitar sound yet with extra tightness and sustain.

Those combined controls deliver compression to suit a myriad of guitar and bass tasks.