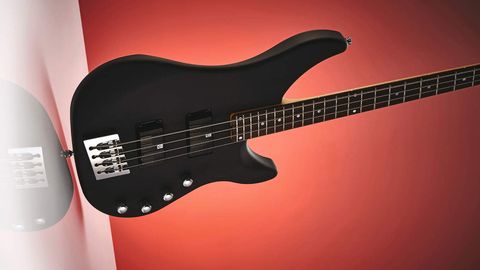 You may recognise Vigier’s Excess range of basses thanks to Deep Purple’s Roger Glover, who’s been a stalwart user for years.

You might have seen the slightly unnerving metal fingerboards their instruments sometimes have, and perhaps noted their French origin, itself slightly uncommon in bass world. Otherwise, the brand is not regarded as a major presence on the world stage, a situation which should definitely be put to rights if the amazing instrument we have here is anything to go by. Read and learn...

You’re paying two grand plus a chunk of change for this super-solid bass guitar, but on picking it up from the supplied hard case, it’s obvious that the money is visible right in front of you. From the thin end down, there’s a Teflon nut, accompanied by something called ‘hardened zero fret technology’, which is self-explanatory.

The tuners are heavy and solid, even though they don’t look it, and the neck is 90 percent maple. What’s the other 10 percent, we hear you inquire - that’s before you realise that the decorative black stripe painted on the rear of the neck is neither decorative nor painted; it’s a strip of graphite, added for strength and immobility.

The six-bolt (count ’em) neck join takes us down to the alder body - which, it says here, has been naturally aged and then given a minimum of five weeks for its varnish coating to dry. Is it better when varnish dries slowly? Presumably. Now, the finish itself is interesting. It’s designed, our chums at High Tech Distribution UK tell us, to be played in; in its supplied form it’s slightly rough and scratchy, but by no means an unattractive finish. We don’t know what the played-in version feels like, for obvious reasons, so do let us know if you’ve got a similar Vigier that’s a few years old.

The details are all here. The bridge, an offset job, is satisfyingly heavy; the rear strap button comes with a brass casing for extra solidity; the jack socket is angled upwards at a strap-friendly angle; and the two flip-out battery compartments work as smoothly as you’d expect.

The whole thing feels beautiful straight out of the box, with the only minuscule downside that comes to mind being the instrument’s slightly mundane looks. That’s wholly subjective, of course.

Plug in and the hallmarks of an 18-volt tone monster are all there. There’s a natural hotness to the Vigier single-coils that fairly crackles off your fingertips in a way that your standard nine volts don’t quite manage. This high performance isn’t for everyone or every bass-playing situation, but it feels pretty exhilarating to play a bass with this much kick. Vigier claim that the active circuit on the Indus eliminates the hum that you often get with single-coils, and although we haven’t tested this scientifically, there was certainly zero background noise coming out of our trusty Ampeg.

Also as expected with this high a voltage, the mids are naturally to the fore, even with the two-band EQ at and the balance control centred. The default sound of the instrument is hot, pushy and metallic, then, so fans of organic woody sounds may want to invest their £2.1k elsewhere. Still, there’s a wide tone palette available here; push the blend forward for extra chunk or back for some hollowness, or simply stay where it sounds best (to us, at least); square in the middle.

The amount of top and bottom boost that this all-active beast supplies is hilarious. The bass end is monstrous, so reggae and dub players will be amply taken care of, but that pales compared to the treble boost, an incredibly potent snap of lightning proportions. Popping the strings with this much top will injure cows at 100 paces, so back it off a little, or simply pluck with less effort. You’ll be in slap heaven here; even players whose slap skills are, shall we say, ‘ripe for development’, will feel a lot more accomplished at the old thumbing after playing the Indus for a while.

As for the bass’s playability, a sure- re sign of quality in this area is when you find yourself giving your picking hand a rest and performing legato runs more than usual. The Indus is both slick in the neck and well-balanced in the body, and the chummy 33mm string spacing at the nut seems to underline Vigier’s philosophy of making everything as easy and fun as possible.

This is one of the nest bass guitars we’ve tested in ages, and yet it “only” costs £2139. Yes, that’s a large sum of money, but plausibly affordable if you’re an established pro or semi-pro who needs a high-quality instrument with power and a wide tone range. Compare it to the £4000 and £5000 basses that we encounter on a regular basis around these parts, and it’s a bit of a bargain. Don’t let the relatively niche Vigier name put you off; you really need to give this instrument some attention.