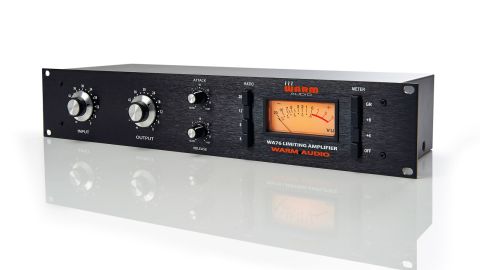 It looks, sounds and feels like the 1176 without the vintage price and the potential maintenance issues.

The original 1176 has become a recording classic. Pretty much every high-end studio in the world owns one, and with good reason - it is one of the most sought after compressors ever built. Warm Audio has taken the classic 'Revision D' version of the original as the template for the WA76. It featured transformers from Reichenbach Engineering who just happened to be bought by Cinemag, the company who supply Warm with its transformers.

The original transformer design is in Cinemag's archive and so they have reproduced it for the WA76. Like the original it features a fully discrete signal path and has those fast attack times made possible by the FET circuitry.

The unit itself looks very similar to the original, save the orange Warm logo. The input and output knobs are both finely stepped which is different to an original and is pretty much our only gripe as we don't see the point. Why have a great big knob capable of fine adjustment and step it?

Next to these are the smaller attack and release knobs and then come the ratio buttons to the left of the meter. These provide the expected ratio's of 4,8,12 and 20 to 1 and will go 'all in' (often called 'British Mode') for that great turbocharged version. To the right of the meter there are the standard meter control options and at the bottom the power switch.

The rear of the unit is equally simple: XLR and 1/4-inch TRS inputs and outputs, a switch which lowers the input level by some 20dB and a power socket for the ubiquitous external power supply. You would think that, with a 2U rack box not exactly stuffed full of circuitry, there would be room for an internal power supply as well. External supplies can be awkward when fitting several units into a rack and, if this unit was expensive, we would be having a good moan right now; but in this case not.

As with its free standing mic pres, the WA12 and the Tone Beast, Warm has put a hell of a lot of quality circuitry into this unit. Making the PSU internal would up the price significantly and the PSUs it does use are of excellent quality so it's a wise choice.

So, how does it sound? Well we took it to a tracking session where we were able to compare it directly to two original 1176s and a Purple Audio. Now those three units all sound a little different due undoubtedly to their age and treatment by previous owners but they do all share that fundamental 1176 character that can really grab a sound and solidify it, and the attack and decay shaping possibilities that go with it.

The WA76 sits right in there among them. Slightly more 'vintage' colour than the Purple, almost certainly due to those transformers, and somewhere between the two originals for its ability to make a drum sound pump.

We had a particularly dynamic singer and in that situation we normally go for 8 or 12 to 1 ratio, slow the attack and give a medium release to try to smooth things out a bit. The Warm did exactly what we expected and the little extra colour in those transformers warmed things up nicely.

On a couple of songs we used it on bass, really pushing the preamp to the point of saturation. That hit the input to the WA76 a bit too hard so we switched the input gain on the back panel and made up the level with the input gain. This solved the problem and made us think that maybe they could put that switch on the front panel between the gain knobs. It would beat scrabbling around the back!

The 'all in' setting is fantastic, doing all the weird and wonderful things to the attack and decay that you would expect and overall it added that 'finished' sound to everything that went through it, which is why the originals are so sought after.

So Warm appears to have done it again. This is a great compressor whatever the price but, as what you get is an 1176 for under £500, it is a genuine bargain and this writer wants one!