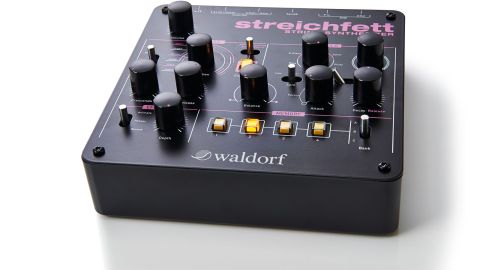 A fun and fantastic sounding synth at a price that makes its limitations largely forgivable.

The past few years have seen German synth brand Waldorf making waves at the affordable end of the hardware market with a run of well-priced machines that have all been either fully or partially analogue.

Those units, namely the Rocket and Pulse 2 desktop synths and 2-Pole filter, all impressed us by balancing plenty of unique character with a decent amount of versatility.

At first glance the company's latest offering, Streichfett, looks to be more of the same - it's housed in a chassis that matches the size and style of both Rocket and 2-Pole. Despite the aesthetic similarities, however, Streichfett is a far more esoteric beast than its recent siblings.

With a name taken from a pun about spreading fat that doesn't really make sense translated out of German, and a USP based around emulating the vibe of the slightly kitsch and inauthentic string machines of the '70s and '80s, Streichfett clearly isn't a straightforward 'all rounder' synth in the way something like the Pulse 2 is.

Additionally, despite its retro inspiration, Streichfett differs from Waldorf's other recent offerings by being entirely digital under the hood.

User control over each of these is somewhat limited, however, with both offering little more than a single rotary for continuous morphing between sounds - controlling oscillator, EQ and filter settings all at once - plus a few simple shaping tools.

The Strings section ranges from a simple square-wave Violin, through Viola, Cello, Brass and Organ, and finally into a range of shimmering Choir sounds. It also features an Ensemble effect with String, Chorus and String/ Chorus characteristic settings, along with Crescendo (ie attack) and Release dials.

A central continuous rotary controls how the two sections are blended together, and allows for morphing between the two, while an Octave switch on the Strings section and a Split switch for the Solo section allow the two to be divided across different keyboard octaves.

Below the sound engine controls sits a simple effects section (see Side Effects), and a Memory section with four preset buttons and a switch for flicking between three banks.

In terms of connections, Streichfett features a pair of jack outputs (Left/ Stereo and Right/Mono), a mini-jack headphone out, MIDI In and Out, and a USB port.

The USB connection allows the synth to receive MIDI from a computer, but also acts as its power supply, and Streichfett ships with a USB plug adaptor so it can be used independently from a computer.

It's worth downloading the full manual from Waldorf's site and getting to grips with Streichfett's MIDI capabilities as, without getting into it here, it's possible to do more with it than you might originally suspect.

Many strings to its bow

Sonically, Streichfett sounds bang on the money bearing in mind Waldorf's brief. As was intended by Waldorf, the sounds produced by Streichfett have little in common with the real world instruments they're named after. (If you're after realistic orchestral sounds, look away now!)

As you'll hear with the audio demos, in our tests some of our favourite sounds came when feeding Streichfett via our DAW's arpeggiator device. Streichfett doesn't appear to be attempting to emulate any one specific string machine, but does an impressive job of capturing the feel of various classic instruments.

Running through the registrations of the sound engines and tweaking the effects, it's easy to achieve decent approximations of sounds from vintage Elka, ARP and Hohner/Logan string machines, and beyond.

There's arguably a case to be made that, being entirely digital, Streichfett doesn't offer much that couldn't be achieved easily via common plug-in synths.

While there is a slight element of truth to this, it's obvious that a lot of thought has gone into both the sonics and ergonomics of Streichfett to make it a perfectly optimised retro package that's a joy to tweak and perform with.

For example, the way the sound registrations interact with one another as you morph between them is an utter joy to behold. And while control over the effects can be a little limited (we'd ideally like to be able to 'dial in' the Ensemble effect) they suit the sound and feel of Streichfett to a tee.

It's a bit of an oddity and a little limited, but it sounds great and is hugely fun to use - and at this price, that's all that matters.