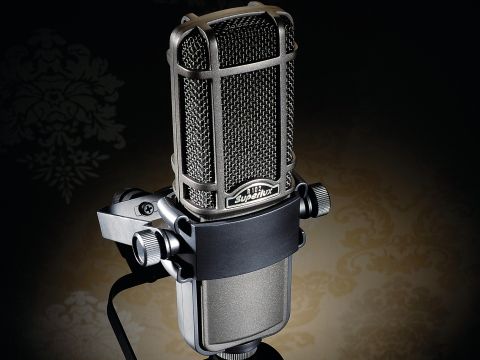 This is a decent mic for the money but doesn't work on everything. If you buy one, be prepared to experiment.

The R-102 is a Taiwanese-made ribbon mic that comes at a very attractive price.

We were eager to try out the R-102 and put it up against our trusty Neumann TLM103 to see if it can get close to the sound/sensitivity of a condenser mic, as claimed in its literature.

Build quality seems very good for such a cheap microphone - it not only looks the part, it feels it as well. The R-102 comes in a sturdy moulded plastic suitcase, with a fully adjustable cradle mount and a black L-shaped XLR. A full shock mount is optional at extra cost.

The R-102 utilises a modular (and so, user-replaceable) aluminium ribbon which is supposed to reproduce instrumental and vocal transients very faithfully. It's worth noting that this mic operates in a figure-of-eight pattern only, picking up equally on either side.

Setting up the mic is a breeze, and we immediately set about trying it on several familiar sources in our studio, while checking it against the Neumann TLM103. While this is a much more expensive condenser mic, many claim that cheap ribbon mics can sound as good as products of its ilk, so it's a worthwhile comparison.

First, we tested the mic on congas, and contrary to the accompanying manual, the sound of the recorded congas was not a precise reproduction of the original sound. While ribbons often present a slight high-end roll-off, the R-102 seemed to zap far too much high end and attack from the congas, especially when compared to the TLM103.

The sound also seemed to suffer from a narrow soundstage and was boxy and a little lifeless.

Next, we tested the mic on female vocals, and again the performance proved to be slightly disappointing. The sound was far too lo-fi for our tastes, and again sounded small, dull and lifeless when compared to the TLM103. EQing the high end for brightness just made the mic sound harsher.

On the plus side, the mic did sound great when used to record super-loud, amped-up electric guitar, trumpet and acoustic piano.

While Superlux is to be commended for making a well-built ribbon at a very cheap price, a ribbon is by no means a golden ticket. While the R-102 is a decent cheap mic, it can't compare with pricey alternatives.

However, it does have its uses, so it's definitely worth a punt.