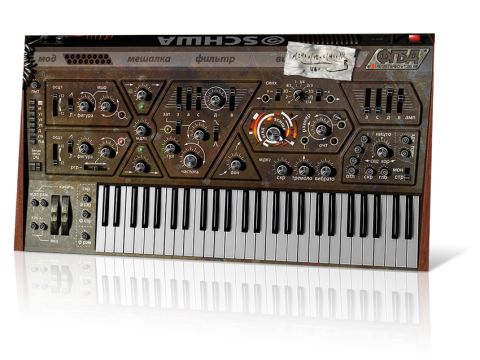 If you crave beefy basses and raw sonic power Olga must be heard.

Schwa's Olga may be the perfect gift for the jaded synthesist. Why? Because it could very well reintroduce the element of surprise to the process of sound design.

These days, you see, analogue-style instruments are rife, yet their design hasn't really changed since the first Minimoog trundled out of the factory in Trumansburg all those years ago. For many musicians, getting acquainted with a new synth is mostly a matter of figuring out where the filter cutoff knob is.

Olga's architecture is pretty standard stuff, but its interface is presented in a sort of garbled Russian (though there is a 'secret' way of converting them into English), so the average user isn't going to have a clue about what's going on until they twist a knob or two.

Some things make perfect sense, even without translation: the oscillators are to the left of the GUI, and it's pretty obvious how they're manipulated and mixed before being sent to the filter section. Employing a pair of free-running oscillators (each with square/pulse/triangle waves) and a multimode filter with resonant low-pass, two flavours of band-pass and a separate high-pass mode, Olga has the grunt to perform any of the day-to-day labour you'd ask of a classic analogue instrument.

A pair of LFOs (one syncable, the other free-spinning) accompany the aforementioned four-stage (amp) and five-stage (filter) envelopes.

Signal processing is dominated by the Drive function, which can be fed back into itself for total analogue annihilation, and it's worth noting that Olga's signal path can be overdriven throughout. Talk about character! This is no delicate damsel, but a cigar-smokin', gravel-chewin' roughneck. Don't get us wrong - Olga can speak in a whisper - but it's easier to make this synth spit and growl.

The effects section features chorus and phaser modules. The obligatory unison modes are provided (2-, 4-, and 8-voice incarnations), along with various mono and poly playback modes.

Schwa reckons that new technology is used in Olga, and if the sound is any indication, they might just be on to something. This synth sounds burly, brawny and ballsy (though the provided presets are something of a letdown).

The filter section sounds especially lively, with all of the squelch and squall you could want. Overall, we found the sound to be somewhat reminiscent of Roland's analogue models from the early 80s, particularly the basses. And while not overly complicated, Olga's pads are thick, dark and evocative.

This instrument is deliberately full of surprises, and while it may not have the glossy sound that you'll hear in many of today's synths, this could be considered a positive point by many. As of the time of writing, Olga is available as a Windows VST plug-in only, but a Mac version is imminent.