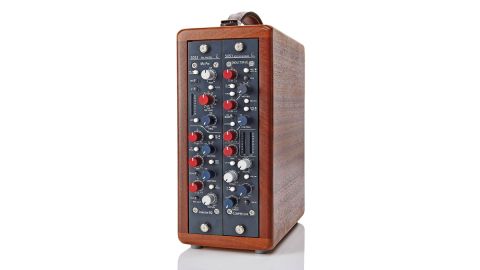 The suitably titled Shelfords are a pair of modules with external power supply. The 5051 includes an inductor-based EQ and a compressor, while the 5052 is a mic pre and inductor EQ. Neither is a slavish recreation of the classic Series 80 modules (1073, 1081, 1064 and so on).

Also worth noting is that the modules are not designed for use in a vintage desk. Audio connectivity is on XLRs and balanced jacks, with power supplied on proprietary screw-in 4-pin connectors.

Our review package includes the upright 2-Way Wood Rack and the 5-Way power Supply, but for the serious investor there's also a 25-Way (2U) Power Supply and 9-Way (6U) Metal Rack with rack ears.

The units share an EQ design (although the 5051 also includes a high-pass filter), so between the two Shelfords you've effectively got four circuits to consider - a mic pre which also incorporates a line input option and high-pass filter (HPF), a three-band EQ, a compressor and a version of the Silk circuit similar to RND's Portico II Channel.

In terms of signal flow and connectivity, the units work as follows. The 5051's default mode is Inductor EQ followed by Compressor, and the EQ can be switched post Compressor.

There are two Line Input connections on the back and one main Output (all on XLR), and the two inputs are simply there for convenience, with a selector at the top of the front panel.

In its default state, the 5052 offers two separate signal paths, the Mic Pre/Line Input with HPF, and the three-band EQ with Silk option. The Mic and Line In and Mic Out connectors (all on XLR) access the former, with the EQ In and Main Out connectors (also on XLR), accessing the EQ. To use the 5052 as one signal path (Mic Pre then EQ) simply select ToEQ.

Based on the 1064 LF band, the Shelford LF (35Hz, 60Hz, 100Hz and 220Hz) includes peak as well as shelving modes. With +/-15dB gain and a gentle slope it's ideal for adding broad low-end girth and we particularly like the 35Hz and 60Hz options as they leave the low mids reasonably untouched.

In LF Peak mode you can be more focused but these are fairly broad on boost and cut. The Shelford inductor MF band is based on the 1073 EQ, although the Shelford's six frequencies (200Hz, 350Hz, 700Hz, 1.5kHz, 3kHz and 6kHz) are slightly different.

What's great with this circuit is, when boosting, the bell shape is quite broad and is very musical, but in cut it's much narrower and ideal for notching out nastiness. This is even more pronounced in the Mid Hi Q mode. The HF band also takes its lead from the 1073 inductor design, but with its own frequencies (8kHz and 16kHz) and additional HF Peak mode.

Once again, the peak mode is nice and broad, and we found the difference between each mode subtle. Finally, set at either 60Hz or 120Hz, the 5051's 18dB/octave high-pass filter works well in conjunction with the LF band.

The Compressor is a hybrid design nabbed from units such as the Portico 5043. Designed to be pretty transparent, the key feature is feedback and feed forward modes. This makes for a wonderfully flexible design capable of punchy snap compression, laid-back gluing duties and lots in between.

There's also a sidechain high-pass option (250Hz) that's useful with bass heavy signals, and you can patch into the sidechain loop on the back panel too.

Finally, the Mic Pre. Although we've left this until last, it is one of my favourite aspects of this design. First, 72dB of gain (achieved using 66dB on the Mic Gain and +6dB on the Trim), is enough to keep anyone happy.

Next, the sound is amazingly present and detailed with a low mid richness that's missing from many mic pres. The full flexible HPF (20Hz-250Hz) is ideal for tailoring mic proximity and removing rumble.

The Shelfords aren't slavish recreations, nor are they all-singing, alldancing channel strips (RND's Portico II Channel has that covered). For us a DI option on the 5052 would make sense but, aside from this minor gripe, we absolutely love them. Creamy, fat and solid sonically, expertly constructed and beautifully presented. Wow.