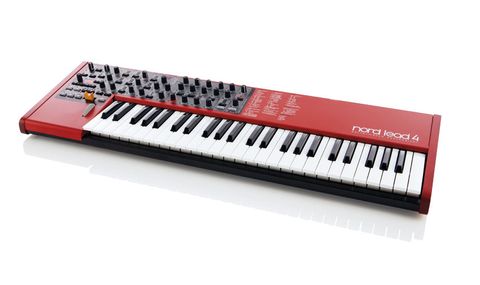 Gripes aside, the NL4 sounds superb and offers some indispensable new features.

Having a new Nord synth to test is always exciting and the latest NL4, though predictably red, is no exception. You'd be forgiven for thinking it was an older Lead 2X but on closer inspection, quite a bit has changed.

Firstly, there's the addition of wooden end cheeks. These look beautiful and protect the synth nicely and, although they add a little extra weight, the NL4 can still easily be picked up in one hand, which is a godsend for gigging.

Nords are always ruggedly built too, and in this respect it's business as usual with the NL4. It has the familiar tough metal case, along with the classic Nord wooden pitch bend (now with independent up/down ranges and four octave range - can we have this on the Stage 2 please?), plus the quirky stone effect mod wheel. The rubberised dials are sturdy and the hard plastic switches are built to last, though we would prefer them to bottom out more softly.

The front panel is typically Nord and it's great that most functions have their own dedicated dial, plus there's no menu diving involved in the main. However, there are a lot of secondary functions accessed via the shift button which we're still not massive fans of - a second shift button to the right of the panel would also help ergonomically.

Whilst it's great that there are so many direct controls, the downside is they are crammed into a smallish area, which seems a little crazy considering how much spare real estate is available on the right of the front panel.

Obviously, this is a cost saving measure so that the same control panel can be used on the rack version and, whilst it's nice to be able to rest another module, iPad or laptop on the panel, we think most folks would prefer a more spacious control panel that was also easier to read and navigate, with more dedicated dials rather than hidden secondary functions.

It would have also been great to see the NL3 LED encoders return, though of course that would bring with it more extra cost. Maybe next time!

On the small screen

Unfortunately, Clavia is still using a small red LED display on the NL4 instead of the lovely bright display that features on the Wave/Stage 2. As it's only numeric, you have to remember patches by bank/number only which is pretty antiquated in 2013, though sounds can at least be named/ordered in the Sound Manager over USB.

Also, a lot of system functions rely on you looking up the function on the front panel list and then dealing with cryptic letters on the display, which again isn't ideal and a bigger screen would have eliminated this completely.

Thankfully, when you turn a dial, the level pops up temporarily in the display so you always know where your sounds are at. Also, pressing 'copy' and turning any dial shows you its value, which is extremely useful.

Moving on, we really dig the keybed in the NL4 - it has a very shallow key travel, which is superb for fast accurate playing, and the 49-note span is enough for most synth playing duties and accommodates keyboard splits nicely. Splitting/layering is simple too and pressing the split button plus any note sets the desired split point. This is a big improvement over the Lead 2X and Wave, which have no split functionality.

The biggest omission here is aftertouch (why leave it out of a performance synth?) though the new Impulse Morph buttons go some way to offsetting its omission. Still, it should have been included, especially at this price point.

In most other respects, the NL4 is equal to, or a big improvement over the much-loved Lead 2X. Polyphony is the same at 20 notes (though more would have been nice for unison/layering) and the NL4 is similarly four-part multi-timbral, giving you four separate synths on separate MIDI Channels, each with their own individual output. This is fantastic for sending out layers within a sound for external processing.

The patch architecture is also largely the same as the 2X, so four banks of 99 programs plus 99 Performances (Performances include up to four layered programs with splits and MIDI info). This is a versatile arrangement and in combination with the Sound Manager it's easy to upload/save/download individual sounds or soundbanks.

There's also USB MIDI included as well as DIN MIDI In/Out (no Thru) and most of the dials and buttons receive/transmit MIDI CC's, making the NL4 a great MIDI controller for live or studio duties.

One of the biggest bonuses on the NL4 compared to the 2X is Master Clock Synchronisation which allows the arpeggiator, two LFOs and delays to be sync'd to time divisions/MIDI clock across the four available program slots.

This is great for keeping everything locked for super-tight performances and also enables the NL4 to seamlessly integrate with any MIDI-controlled studio or live set-ups, which is invaluable in this day and age.

The oscillator section has been completely overhauled, with a much-improved VA engine. Whilst there are the same basic waves available as on the 2X, these have been refined, with better resolution/clarity and less aliasing. This means the NL4 has a clearer punchier and more upfront character, with less harshness in the midrange. The only slight criticism here is that the NL4 is quite refined in the low end and without EQ (the Wave and Stage 2 have onboard EQ) you may find it lacks a little bass extension.

Regardless, it can do super-authentic analogue impressions and then more warped sounds in the blink of an eye, (particularly with the new filter modes) and the envelopes are also super-snappy, which means it can do very authentic Moog-like basses and punchy drum sounds. The new unison modes sound lovely too, thickening up and widening sounds nicely. I also love Nord's mono glide algorithm in the NL4, though it's a shame there's no polyphonic mode.

In the Osc Mod section there's a handy new Soft Sync mode for locked-yet- soulful sounds. This is in addition to the Hard Sync and two new FM modes that offer higher modulation intensities for more harmonically rich FM sounds.

These new modes sound superb, even giving this writer's Yamaha SY77 a run for its money - it's easy to emulate most classic FM tones on the NL4 with little effort. Further to this, there are 128 single-cycle wavetables to choose from in Osc 2. These new wavetables (similar to our Stage 2) all sound suitably characterful and include analogue-type waves alongside formants, pianos, organs, bells/tines and more.

Oscillator 2 also features a versatile noise option with tuneable frequency and resonance - it's perfect for dialling in all manner of sound effects and killer for drum sounds too, particularly when combined with the handy new pattern sequences that are available via the NL4's two LFOs.

You could make a sine wave kick on Slot A, then use Slot B for noise based hats, Slot C for noise based snare and Slot D for an arpeggiated bass line, then send LFO patterns to Slots 1,2 and 3 to make great sounding drum grooves. Clever and versatile, especially for one-man shows!

To sum up, the NL4 is a raw yet polished-sounding synth, with plenty of sound and feature enhancements. The new filter types and Impulse Morphing are especially notable (along with the versatile new effects), and though you can't upload samples (like the Wave) and the interface could be more spacious and flow better, the basic sound and feel is great and the wavetables add a lot of new scope.

It's certainly one of the nicest sounding VAs around and gets very close to real analogue. It will appeal to those looking for one synth that can do authentic analogue emulation (both for live and in the studio), yet it can go way beyond into futuristic digital sonic mayhem and back in a snap with the ingenious new morphing implementation.

Sure, it lacks some features that we expected at this price but the NL4 is inspiring to play and is very much a player's instrument - it draws you into its world without you noticing and that alone speaks volumes.