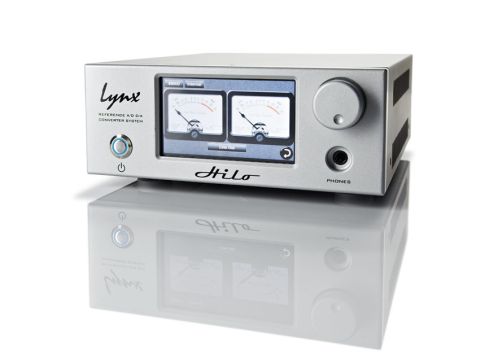 The HiLo offers a unique blend of features with an equally unique price/quality ratio.

The HiLo combines Lynx Aurora converters and a multichannel USB interface into a non-rackmount system for monitoring, recording, digital format/sample rate conversion and level metering which is not only aimed at the studio recordist, but also at the mastering and audiophile markets.

Mobile applications are also catered for via the four-pin XLR 9-18V input, though you'll want a power source that can provide the 30W necessary.

The front is dominated by a 480 x 282 pixel LCD touchscreen display, accompanied only by the standby button, headphone socket and stepped jogwheel. Conversely the rear is bursting with I/O. Finally you get a choice of a black or silver front panel.

The HiLo is all about the touchscreen which accesses the five menu pages. First is the metering screen with three options: dual VUs (dBFS +3), two stereo horizontal bargraph meters, or All I/O (except ADAT) via 48 vertical bargraphs.

The first two stereo options can be used to monitor any non-USB stereo channel with two taps of the screen. The All I/O option is a bit too small for any meaningful monitoring, but enough to see what's where. The other two options are clear, with the horizontal bargraphs proving the most useful.

The second screen hosts the metering and display options, including the 'Return to Meters' time setting that saves a lot of toggling back. The third page shows digital signal statuses such as input signal properties and sync state, as well as hosting digital output settings. An additional 'Frequency Counter' monitors all of the incoming digital rates.

The fourth page is home to the save/recall buttons for six scene memory slots. These can't be renamed so you have to know what's in each. The other noteworthy button here is the sample rate converter - great for those who regularly use playback sources with different rates (DSD recorders).

"The LSLOT expansion port at the rear comes with the LT-USB card pre-installed to turn the HiLo into a 32-channel USB 2.0 interface"

The fifth and final page hosts the sample rate and sync source settings as well as the output mix page and Line In/Out trims (see The Trims box). The output mix page is where the routing magic happens; each output pair, including USB Record and ADAT out, has a master fader and input selectors/faders for the USB Playback, Line In and Digital input channels.

Each fader is accompanied by a level meter and can be set via the touchscreen (tricky) or the jogwheel (far easier) which adjusts in 0.5dB steps. Most of the buttons on the touchscreen are large, and laid out so that operation isn't fiddly - although those with sausage fingers may find otherwise. Like many LCD screens, viewing angle is a slight limitation, especially for the VU meters and a few white-on-grey sub-menus.

The LSLOT expansion port at the rear comes with the LT-USB card pre-installed to turn the HiLo into a 32-channel USB 2.0 interface. The USB I/O shows up on the HiLo as stereo pairs which can be routed to/from any of the hardware I/O. Beyond basic playback this allows the HiLo to capture a variety of mixed sources for post-production or stem mixing.

The converters used in the Lynx Aurora product range are featured in the HiLo and in combination with the analogue line I/O and headphone amplification the results are excellent. Firstly the frequency and transient response is top notch on playback (monitoring, line out and headphones) giving a crystal clear reproduction of the source.

The stereo imaging is a match for this performance and combined make monitoring a real pleasure (when the source is good, that is). Small shifts in a source/mix are easily picked out and adjusted without overcooking, a problem that often occurs when conversion and analogue signal paths are compromised.

The line input and AD conversion has the same story to tell and makes for a very trustworthy path for mixes, masters and any kind of tracking. The headphone amping is impressive and you could spend hours picking out the ear candy in your favourite recordings, but in practice it makes mix/master checking a whole load easier than with the often questionable headphone provisions on most interfaces. Though we could perceive subtle differences between the HiLo and the Lavry AD10/DA10 combination, these were definitely in the subjective category and were also source dependent.

The HiLo is oddly peerless in its feature set and orientation, being part interface, part monitor controller and part mix/mastering high-end stereo AD/DA. Separate AD and DA converters of a similar quality cost a tad more, and yet it still has a whole host of features to go, from the metering and format conversion to the DAW interfacing.

Though a good quality interface package at this price will get you more channels, possibly some preamps and DSP, we've never used one with quite this level of sound quality. The HiLo is a bit of an oddity, but it's one that should quickly find favour with a range of users.