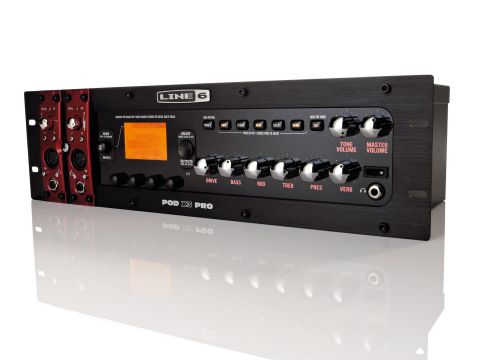 The POD X3 Pro covers all your guitar and instrument recording needs in one rack-mountable box.

The X3 Pro is the new flagship of the POD range. A 3U rackmount unit, it's designed to allow interfacing with anything that might be found in a pro studio or on a stage.

Not only is this a hardware amp simulator with all the necessary analogue connections, but it's also a USB 2.0 audio interface that offers various signal paths to and from the computer.

Besides the USB port, digital interfacing is taken care of by AES/EBU input and output and S/PDIF input and output. In addition, there are MIDI In and Out/Thru sockets and a connection for Line 6's Variax guitar.

Rear-panel analogue connections include three stereo outputs and a stereo FX return and send. The only inputs round the back are a pair of 1/4-inch jack line offerings, but the front panel sports a pair of XLR mic inputs with phantom power, hi-pass filter and pad plus two Hi-Z guitar inputs with pads.

There are no issues with connectivity, then, but what about the onboard sounds? Well, the POD X3 Pro is part of the X3 family that includes the bean-shaped POD X3 and the POD X3 Live floor unit, and represents a step forward from the earlier XT series.

Improvements over the XT include many more models than before and a new Dual Tone mode that allows the signal to pass simultaneously through two complete amp and effects chains (Tone 1 and Tone 2) instead of just one. This means that you can send a single instrument through both paths or, alternatively, use two inputs to individually process two instruments at the same time.

There are models onboard the POD X3 Pro to suit guitar, bass and vocal recording. What you get in total are 78 guitar amps, 24 guitar cabs, 98 stompbox and studio effects, 28 bass amps, 22 bass cabs and six vocal preamps. There are 128 user presets and 250 factory-preset patches arranged in categories that will instantly guide you to the type of sound that you might want for a particular task.

Each patch is clearly displayed on the POD X3 Pro's display, with each component of the signal displayed as a block. Six knobs (Drive, Bass, Mid, Treble, Presence and Reverb) can instantly adjust the sound of the amp model, while a series of buttons and soft knobs take care of editing everything else in the signal chain.

The first thing that strikes you about the POD X3 Pro is the flexibility of its connections, whether for studio or stage use. Plugging in an instrument or microphone you have a choice of analogue outputs that can be connected to your recording system or stage set-up, giving various options for outputting the fully processed sound or the dry sound from the input.

For recording, the USB connection probably offers the most convenience. Designating the POD X3 Pro as your audio device gives you four pairs of channels, and if you arm the appropriate number of recording tracks you have the option of recording various aspects of the processed sound plus the dry sound for later re-amping.

POD X3 Pro owners get a free download of the new POD Farm software and can use this as a plug-in to process the dry sound at mixdown.

The range of models in the POD X3 Pro is so expansive that there's very little in the world of guitar amps and effects sounds that you can't dial up - from all the staple, Fender, Marshall, Vox AC30 tones through a range of more esoteric amps and more effects than you can wiggle a pick at.

The Dual Tone processing offers plenty of creative possibilities, opening up a world of hybrid sounds that go well beyond basic guitar stuff for some crazy effects.

Alternatively, Dual Tone could let you record both guitar and vocal at the same time, each with its own modelled signal path. The XLR inputs provide a nice clear sound for any vocal mics and, with models of classic vocal preamps onboard plus compressors, there's plenty of scope for sculpting the tone.

Without any tweaks at all the onboard presets should instantly be suitable for a host of recording tasks, but they are also a very useful jumping-off point for editing things exactly to your liking and creating new sounds.

Editing is very intuitive from the front-panel controls, all of which are instantly linked to the very clear display. However, if you want to see things on a larger scale, the POD X3 Pro can be edited with the included Gearbox software.

The POD X3 Pro is the current pinnacle when it comes to relatively affordable hardware that lets you record guitar using modelled sounds, and offers massive versatility in terms of both tone generation and connectivity.

This is not just for guitar, bass and vocals, though - it's a fine resource for adding distortion and effects to any sound. Rack one up in your studio and we guarantee it'll get plenty of use.

Listen to the POD X3 Pro in action: