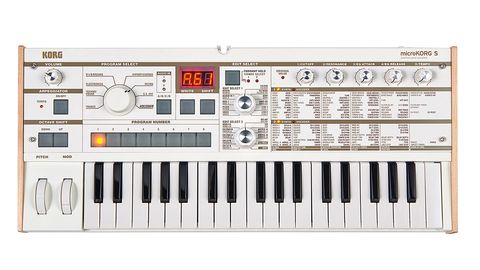 All the fun and charm of the original is retained with more updated presets a plus, but you may find that you will want more.

Korg has spent a lot of time catching up with some old classics over the past few years, with some releases more surprising than others.

So when the Japanese manufacturer announced it was updating its diminutive vocoding synthesizer, the microKorg, it didn't quite have that same feeling of excitement that we got from the likes of, say, the ARP Odyssey or the MS-20 reissues. Still, we're not ones to let that sort of thing dampen the spirit and decided to explore this new S version a little closer.

First things first, that 'S' we're presuming stands for 'speakers', or is that 'special edition'? We can't quite decide. There is no mention of it anywhere in the documentation, or even on the website, so your guess is as good as ours. Aside from the obvious change in livery, it's the speakers and new presets that are key selling points in this new 'S' edition. Everything else remains the same.

The exterior has taken on a clean and clinical feel with the white finish, taupe detailing and lettering. Aside from the large bank of editing functions daubed across the front, the interface is sensible with sound selection and tweaks easy to achieve. The editing, however, feels rather clunky.

You can see where Korg is coming from with two edit dials to select functions and a bank of five smaller rotaries to adjust individual parameters, all to eliminate the need for a screen and menu-diving.

The five dials are numbered and in their default state act as filter, enveloping and tempo controls; with Cutoff as number one, Resonance number two, and so on. However, when moving over to the editing side, the Cutoff has now moved over to dial number two, rather confusingly, and when editing functions on the dials four and five, the ocularly challenged among you may need to deploy a ruler to get a bearing on the matrix of functions at your disposal, as the typeset is rather small.

Moving onto the sounds and Korg has added an extra bank of 64 new presets and a bank of empty user slots giving the microKorg extra longevity. The new presets are good and certainly do sound fresh. There are plenty of dance-orientated basses, leads and pads. It's not all brash floor-filling sounds though,  as there are also a good deal of delicate and nuanced tones suitable to all walks of electronic music.

On the vocoding side of things, everything is pretty much the same as before. The detachable gooseneck condenser mic is still as unruly as it was before and a bit on the flimsy side, so you will find yourself wrestling it into place quite often. Going around the back of the unit you can see the vocoder utilises the Audio In 1 section.

Should you wish, you can swap out the gooseneck for your own microphone and a dynamic mic input is also available. Making use of the Line selection switch and volume control will allow you to input any audio source through the vocoder, expanding the sonic possibilities there.

Onboard speakers usually scream toy machines and are not often taken seriously, but over the past few years more and more smaller instruments are including speakers and battery power as standard. On the microKorg the speakers aren't just tacked on for the hell of it, but a well thought-out solution. Their hidden nature does mean that some of the higher frequencies are attenuated and the sound lacks any real clarity.

Much like your average 2.1 system, the microKorg S features a stereo pair of  3.5cm drivers kicking out 0.5 Watts each and a 4cm subwoofer with 3 Watts of power. Quite cleverly, the stereo pair are located underneath the keybed and the subwoofer is mounted within a box.

The driver is roughly located underneath the two centre edit dials. The subwoofer and its enclosure are designed to add tactile feedback associated with the feel when playing acoustic instruments.

It is worth noting that some of the more bombastic sounds struggle when being pumped out of the speakers and you will find yourself tweaking the volume quite often. That said, the speakers do perform admirably well even at high volumes for most of the sounds available and they are quite loud indeed, although you won't be ditching the P.A anytime soon. Note that when running on battery power the volume is reduced, which is presumably to save on power.

To buy or not to buy?

The original microKorg was released back in 2002 and proved rather popular, so it's no wonder Korg wanted to tap back into that market. However, that was 14 years ago and a lot has changed since then. Musicians' and producers' standards have been raised by the onslaught of iOS music making and all that can be achieved there, not to mention the rise of cheaper analogue componentry, something that Korg themselves have had a hand in.

So does the microKorg S have what it takes to make it relevant to today's user? Well sort of, yes...

The newly added presets feel in line with current trends but, considering this is an all-digital machine, it's easy to feel a little cheated. That's not to say there's anything wrong with analogue modelling per se; it's just that, with the likes of Roland's JD-Xi featuring an analogue voice as part of its hybrid architecture, you are missing out on some of that analogue warmth and meat.

There isn't enough here to entice owners of the original to upgrade, unless you really must have onboard speakers. And it's perhaps the speakers that let this fun little unit down a tad. There's no doubt they are well engineered, but when comparing them to the headphone and line outputs, they do lack clarity in the upper frequencies and there's usually some adjustment required to get the best out of them.

Despite this, for new users or budding producers, there are plenty of presets to keep your interest piqued and with the 64 empty user slots, you can get stuck into some of your own sound design. Except that it's not the nicest editing workflow we've come across.