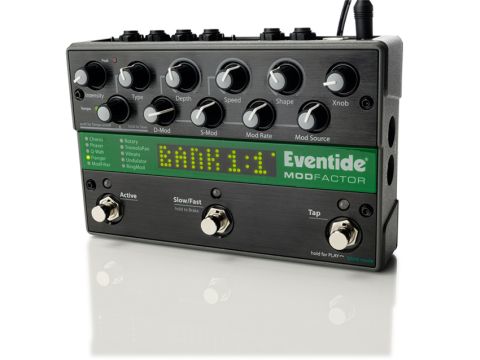 A worthy and versatile addition to the Eventide stompbox range. It doesn't disappoint!

We once had the pleasure of reviewing the debut model in Eventide's 'factor' stompbox range - the Timefactor delay pedal.

The delays on board were some of the best we'd ever heard in a digital stompbox and came directly from the brains of Eventide's best loved studio rack units that have graced many a hit record.

The Modfactor builds on this same heritage but this time focuses on modulation and sound mangling, rather than delay-based effects. With this in mind, we were very excited to put the Modfactor through it's paces.

The Modfactor's overall look and feel is very similar to the Timefactor and is built into the same high-quality metal box, with a very similar control layout.

There are 11 rotary controls on the front panel that have different functions depending on the type of effect selected.

Along the top (from left-to-right) there is an intensity dial, a type dial (which controls the types of effect available within the effect selected), a depth, a speed and a shape control and ﬁnally an 'Xnob' that changes function depending on which effect is selected.

On the bottom row of rotaries is a D-mod and an S-mod control. These control the amount of modulation applied to the depth and speed parameters.

Finally, there is a mod rate and a mod source control and it's worth noting the 'Catchup' parameter, that ensures smooth transitions between sounds with wildly different parameter values.

The three footswitch controls provide easy access to the heart of the pedal. The 'active' footswitch activates or bypasses (true bypass is available) the selected effect, while the slow/fast switch toggles between the lowest/ highest LFO speeds within each effect and in the rotary simulation functions as the Leslies slow/fast/brake.

In addition, the tap tempo footswitch sets the BPM of the selected effect. This tempo can also be synced to MIDI so that the effects modulate in time with any other MIDI equipment.

There are two main operating modes within the Modfactor that are footswitch controlled. First off 'play mode' where the footswitches directly control effect parameters (for example LFO/rotary speed) and a 'bank mode' that enables quick stepping through sounds within the 20 user banks.

Each bank can hold two separate preset effects and the active and slow/fast switches allow direct access to these presets in this mode. It's very slick in operation and worked flawlessly when I took the Modfactor out on a gig.

It's worth mentioning at this point how great the display is. It can be read easily from a distance and you always know where you are, even in the most hectic of stage/studio situations.

Also, when you turn a dial, its parameter value flashes up in the display - there is always a useful graphical, alphabetical or numerical representation of the parameters and modulation amount.

Now onto the most important part of the unit - the effects! The high quality of the Timefactor's effects left me with high expectations for the Modfactor but rest assured, it most certainly delivers and doesn't disappoint.

Overall quality is incredible at this price point and the effects sound much more expensive and professional than they should, with an analogue-like sound. It's hard to believe that these effects are digital, but then Eventide seem to have the know-how!

The choruses, phasers and flangers can shimmer subtly, or wobble your speakers to no end but are always delightfully musical and controllable.

The Q-wah can operate as a dynamically controlled autowah or a normal wah-wah pedal (you can connect an expression pedal at the rear for foot-controlled wah-wah - see more about connectivity in the box above).

It sounds juicy, squelchy and authentic. The modﬁlter effect contains several ﬁlters that can be used to warp and mangle sounds through the stereo spectrum and it's great for choppy, glitchy and stuttery sounds and comes into its own when synced to external MIDI.

This is one of my favourite effects in the Modfactor along with the Undulator, which combines delays, detuning and FM tremolo modulation.

The Undulator is particularly great for twisted modulated chorus like effects and really needs to be heard to appreciate the sonic magic it can offer.

Finally, the Ringmod effect can process your sounds into complete oblivion and is great for clangly, bell-like metallic madness!

Those after accurate authentic rotary cabinet simulations will ﬁnd the Modfactor a pleasure to use sonically and functionally - it does a great job of emulating the real thing. As with all the other effects, you can really tweak the parameters to perfection, to obtain the desired sound/result.

The tremolo also works well in mono and in stereo and can be used as an autopanner with different waveshapes. I found it could emulate the stereo panning of my Rhodes Suitcase 73 with ease and ﬁnesse.

To conclude, there is little to ﬁnd fault with in the Modfactor, except perhaps for the fact that it can't be battery powered. It's every bit as great as their previous attempt, the Timefactor pedal, both in terms of build quality and sonics and I can't see anyone regretting purchasing one.

It's versatile for both the studio and the stage and offers a level of control not often seen in stompboxes at this price. The only problem is, once you've tried one, you'll want the buy the whole range!