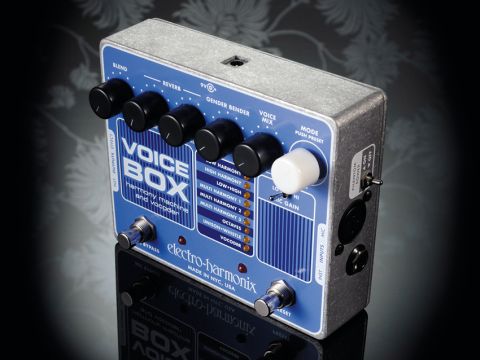 A great vocoder and a clever harmony generator - as long as you give it a clean, consistent and in-tune input.

Founded by Mike Matthews in 1968, Electro Harmonix has been at the forefront of stompbox effects for over 40 years.

Now, for 2009, it's turned its expertise to making a vocoder and harmony generator in stompbox format.

At its heart, the Voice Box has a 256-band vocoder (the more bands, the clearer the diction), which is impressive. In comparison, the microKorg has an eight-band vocoder. The Voice Box also has six harmony/two octave modes for accompanying solo singers.

The box itself is sturdy, looks great and is very much in keeping with the retro/psychedelic look of the Electro Harmonix range. Input-wise there's a balanced XLR mic input with phantom power and a low and high gain selector for using with different output mics. There's also a jack instrument input for plugging in guitars, keyboards and other sources.

As far as outputs go, there's a balanced XLR for the effect-only output and a jack instrument output for plugging into an amp.

First up is the Blend dial that controls the balance between your dry/effected voice. Next are two Reverb dials (dry/harmony). The reverb, while fairly dark sounding, is very useful. You could have a dry vocal with reverbed harmony effect for example, or vice versa.

Following on are the deeper controls. First is the Gender Bender formant shifter that changes the generated harmonies to sound more male or female. This works great in practice.

The Voice Mix dial ﬂips between different harmonies in Harmony modes (3rds/5ths and octaves) while in Octave/ Unison and Whistle modes, it flips between high and low octaves, or a blend of the two. Finally, it acts as a harmonic enhancer/treble EQ when in Vocoder mode.

So how does it work in practice? The vocoder is amazing. There's lots of scope for shaping the final sound with the Gender, Reverb and Voice Mix controls and you can hear every word clearly and precisely.

We found the harmony generation a little unstable and inconsistent at times, though useable results are possible after plenty of practice. While we can't complain at all about the generated tones, the box would often have difficulty picking up any of the quick major to minor changes and some of the more jazzy inﬂections.

If you don't sing perfectly in tune and at a consistent level, the box sometimes has trouble following - we advise using a compressor and getting some singing lessons before using the harmony modes!

Also, in order for the voice box to track at its best, you really need to run an instrument through that has plenty of bite/attack. Guitar and Rhodes are a good bet, though the vocoder works great on all inputs.

All in all, this is a fantastic vocoder and a very capable but sometimes frustrating harmony generation box. The harmony processor is very much reliant on very in-tune singing and decent vocal/instrument levels going in (ideally, use a compressor between the mic and the voice box).

But while the harmony generation is not quite as foolproof as we would have hoped, the quality of the vocoder alone justifies the price.

Listen to what the Voice Box is capable of: