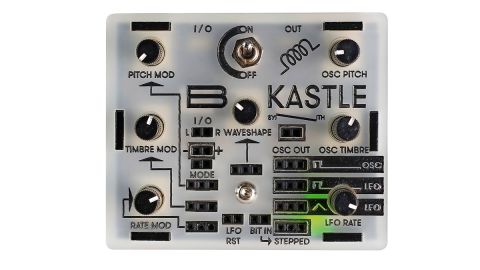 The Kastle is a very fun little noisemaker with a few creative tricks up its sleeve.

Czech brand Bastl has been subject to some well-deserved hype in recent years, having carved out an esoteric niche within the European tech sphere with its hand-made, open source instruments, wood-panelled Eurorack systems and wildly-inventive trade show booths.

Its latest creation, Kastle, is a digital, semi-modular synth housed in a tiny chassis barely larger than the trio of AA batteries used to power it.

Kastle is based around a pair of Attiny 85 chips, one used for sound creation and one for modulation. It's currently only available as a pre-built synth, but a DIY kit version is due for release soon too. In either case, Kastle is open source and its chips can be re-programmed via Arduino.

In its standard state, Kastle is capable of three varieties of modulation synthesis - phase modulation, phase distortion and track and hold synthesis. As with the bulk of Kastle's sound-shaping parameters, the synthesis type can be changed by making a patch with one of the included micro patch leads. There are rotary controls for adjusting Osc Pitch (which adjusts the carrier signal), Osc Timbre (modulating signal) and Waveshape. The synth also features a built-in LFO with Rate rotary.

All of the above parameters can be controlled through CV via a micro patch input, with each also getting an attenuator rotary controlling modulation depth. There are also patch outputs for the modulation oscillator, LFO square and triangle waves and a stepped voltage generator, the latter being a rudimentary sort of step sequencer that outputs voltages either at random, or in eight- or twelve-step patterns. Finally there are a pair of mini-jack connections - an input, allowing two CV signals to be routed in via the left and right signals of a stereo jack, and an output.

Sonically, the Kastle is noisy and gritty, specialising in a pleasingly dirty sort of digital synthesis. While it's possible to play the synth melodically using the CV input, it's easier - and more fun - using Kastle to create dissonant drones and LFO-driven percussive patterns.

On the latter front, the stepped output proves to be the Kastle's trump card; by playing around with routings between the LFO, stepped generator and modulation parameters, it's possible to create a surprising variety of looping, syncopated percussive patterns.

An LFO reset input makes it easy to sync these to a pulse clock input too.  Kastle is an esoteric little device, and its size makes it a bit fiddly, but for sonic fun and creativity, it's an absolute winner.