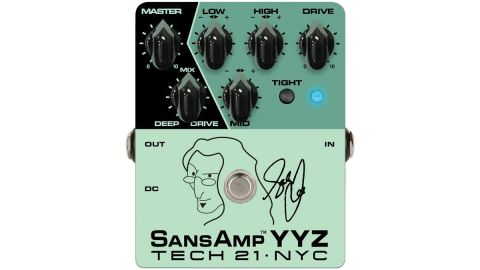 Rush fans will be left speechless.

Witnessing the evolution of Rush from a curious band of prog wizards with a niche audience (the 70s) to mulleted tech geeks (the 80s) and finally to classic-rock avatars (the last 20 years or so) has been a gratifying ride.

Along the way their music may have risen, fallen and risen again in mainstream acceptability, but one constant has been the bass community’s appreciation of Geddy Lee’s playing and tone. His trajectory has taken him to Fender via Rickenbacker, with detours into Wal, Steinberger and elsewhere. Along the way Lee has evolved a signature overdriven tone that is easy to recognise but tricky to describe in words, so it’s just as well they invented YouTube.

In 1996 Lee decided to stop touring with amps and cabs, a decision that was not only ahead of the curve but also totally prophetic of the DI-centric era in which we find ourselves. His bass tone was generated from 2017 via a signature SansAmp rack unit, the GED-2112, named after a particularly well-regarded Rush album. Now, said tech has been shrunk into a standard-sized, all-analogue pedal, the YYZ, similarly named after one of the Canadian trio’s better-known instrumentals.

Helpfully, the enclosed manual tells you exactly how to set the controls for Geddy’s signature tone. You don’t have to do this, but we thought it would be maximum fun to go from zero to 60, so to speak, and jump straight from our flat-EQ’ed, fully dry tone to a totally Geddified one.

Follow the Geddy setting - in doing so, feeling a bit like Indiana Jones finally getting to the Holy Grail - and step on the YYZ, and the resulting blast of Lee-ness from your cab will make you laugh, it’s so perfect. It’s warm, smooth and creamy, as crunchy as a massive slab of cheesecake but less calorific. Tube emulation has been done before, of course, but we’re particularly impressed this time.

Once you’ve finished pretending to be as good as Geddy is (it took us about 15 seconds before we were forced to admit the sad truth), you’re at liberty to explore the many other modulation opportunities that the YYZ offers. The three-band EQ is powerful on all levels, so treat it with the utmost respect if you like your neighbours; the mid in particular is the secret sauce. Mix is a valuable control too, ranging from Deep to Drive. The former end means that it’s essentially Geddy’s dry tone rather than yours, and the latter his sound with added dirt. Finally, there’s a Tight toggle, which removes a chunk of bottom end and adds snap to the upper mids and top; with it off (out), the tone is like Geddy’s but with extra bass, which works, of course.

Playing through this pedal is a bit like having a tiny Geddy Lee, perhaps half an inch in height, living inside the unit and tweaking the controls from within. We can’t think of a better way to put it, or indeed a better reason to buy it - even if you’re not a Rush fan. If that’s the case, all we can do is clap our hands dramatically to our mouths, and then suggest you listen to ‘Limelight’ without delay - it’ll make you a better person.