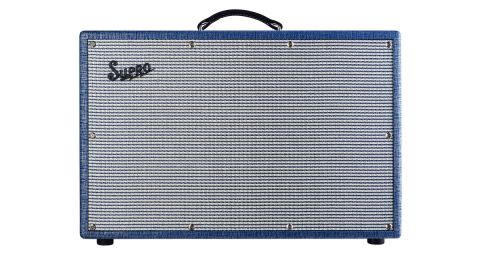 The Neptune is a credible alternative to other vintage-type 2x12s and is definitely worth checking out.

Supro is one of the world’s oldest musical instrument brands, so it’s been good to see them revived and back on the shelves again with an ever-expanding range of original and classic designs.

The latest model to be released is the 1685RT Neptune Reverb, a 2x12 combo with reverb and tremolo, decked out in Supro’s 1964 reissue vinyl. This amp was developed by Supro in partnership with SIR (Studio Instrument Rentals), the USA’s largest backline rental company, and is apparently a response to artist requests for a 2x12 Supro with reverb, as an alternative to Fender’s Twin and Vox’s AC30.

The 1685RT is a substantial amp, with a wide-body cabinet housing two of Supro’s British-voiced BD12 drivers, which were developed for the award-winning Black Magick amplifier.

Despite the Neptune’s size and weight, there’s just one single carry handle on the top: it’s a high-quality leather affair, but that doesn’t make the amp any lighter - 25kg is a lot of weight to swing on one hand and playing a guitar with an arm or wrist injury is no fun.

In fairness to Supro, for pro backline rental use you’d expect the Neptune to be carted around in a flight case with wheels by road crew, where the lack of carry handles would be irrelevant. Inside the smart blue cabinet is a robust tray chassis containing Supro’s typically high-quality printed circuit boards, which hold most components, including the valve bases.

Component quality is good, with metal film resistors to keep hiss levels down and neat, tidy wiring. The Neptune uses a pair of 6973 output valves, a type more commonly found in vintage jukeboxes but also used on some early Supros and considered to be a key part of the vintage Supro sound.

The 6973 looks similar to an EL84, but isn’t interchangeable because the pin connections are different.  Also inside the cabinet is a long pan reverb spring, which is valve powered, along with the amp’s vintage tremolo effect.

We tried out the Neptune with a variety of single-coil and humbucking guitars, including a Strat with Duncan Alnico Pros and a PAF-equipped Les Paul Standard. The Neptune has no preamp gain control, so most of the amp’s overdrive effects come from turning it up.

At lower volume settings, the Neptune produces fat ‘blackface’-inspired cleans with lots of headroom. The tone controls interact smoothly and it’s easy to dial in any guitar; adding a little more treble for humbuckers is all that’s needed to retain a nice even balance.

Turn the volume up and things get progressively raunchier, with Supro’s characteristic edgy overdrive balanced by a punchy midrange producing a great classic rock lead/rhythm crunch. With no preamp gain, the amount of drive you can get depends on how high up you turn the volume control and what kind of guitar you use.

Low-output single coils have a nice crunchy clarity; however, you need a good beefy humbucker if you want to drive the Neptune hard. Alternatively, any decent stompbox will do the trick. Indeed, the Neptune’s medium-gain preamp makes it an ideal partner for effects, although everything has to go in through the guitar input as there’s no built-in effects loop.

The Neptune’s built-in tremolo sounds excellent, with a good range of speed and depth control. The reverb on this sample was less inspiring, with a pronounced cyclical fluctuation that makes it sound more like a short delay with the feedback control turned up, rather than a splashy cavern.

We’ve heard better spring reverbs from Supro in the past, so maybe this was a one-off. Both reverb and tremolo can be foot-switched if needed.

Big 2x12 combos aren’t for everyone: they’re often unwieldy, heavy brutes that demand an extra degree of dedication if you’re responsible for your own carriage.

However, the second loudspeaker adds considerable depth and projection, and on a big stage where it can be wound up properly, the Neptune’s relatively low output is ideally suited for players who like to drive everything from their guitar.

As USA-assembled amps go, the price is about right, but bear in mind the Neptune is all about vintage appeal, with no modern features such as effects loops or built-in attenuators.