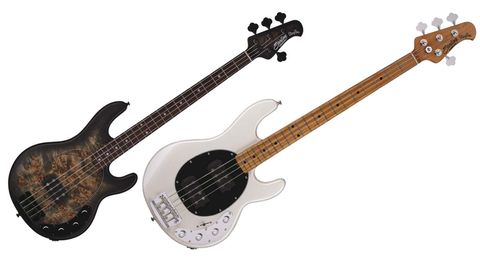 High-quality instruments priced to give food for thought to anyone who’s about to shell out the big bucks for the bigger reputation of the much-celebrated Music Man Stingrays.

Ernie Ball’s Music Man Stingray is one of bass world’s most iconic instruments.

For the uninitiated, go and listen to the Red Hot Chili Peppers’ deliciously funky masterpiece Blood Sugar Sex Magik, or the absolutely hard-as-nails riff-orgy that is Rage Against The Machine’s self-titled debut album. Yeah, that sound. That’s a Stingray.

Recorded on any other bass, those albums just wouldn’t sound the same – not without one of bass guitar’s most recognisable voices running through them.

It’s the same story for countless other recordings made since the Stingray’s 1976 inception, so the new Sterling by Music Man Ray34PB and Ray34HH have a lot to live up to if they are to be considered serious alternatives to their more expensive, flagship relations.

The 34PB has a striking trans-black satin finish over its contoured mahogany body and poplar burl veneer top, which houses a single alnico humbucker and a three-band active preamp.

Like the HH, it has six bolts attaching the neck, but its fretboard is rosewood. Despite looking like chalk and cheese, these basses share the same dimensions, bridge, medium frets, open gear tuners and pop-out 9v battery compartment on the back. So far, so good.

Both instruments are beautifully set up. I hadn’t doubted that the playability would be superb, and my confidence was not misplaced. Subjectivity comes into play, of course, and I much preferred the feel of the 34HH’s neck to that of the 34PB which felt a little too dry.

Sonically, these basses perform very differently. The Ray34PB sounds just as you’d expect from a Ray, providing all the grit, punch and bite associated with the model. Sure, some people might say it’s a one-trick pony, but who cares when it’s such a good trick?

The Ray34HH, however, has a darker side to its sound, which is where the fun really begins. Thanks to its two alnico humbuckers, the Ray34HH’s five-way toggle switch provides access to a wealth of pleasingly fat tones.

There’s plenty to enjoy in between the more brittle honk of the bridge pickup and the no-holds-barred earthquake of the neck pickup. Those with more delicate tastes need not be scared off by such trouser-flapping pronouncements, as the HH’s gung-ho spirit is easily tamed via the three-band EQ. But who wants to sound tame?

This begs the question: is it just the Stingray sound you’re after? If your answer is yes, then you could happily buy one of these Sterling Rays and most people wouldn’t hesitate to reassure you that it sounds exactly the same as an original Ernie Ball Music Man Stingray.

So here’s the dilemma: should you get a new Sterling Stingray, or a second-hand Ernie Ball Music Man Stingray for roughly the same price? If you want a better quality finish then it’ll cost you several hundred pounds extra for the pleasure. Is that extra outlay worth it? Ultimately, that’s for the individual to decide.

It’s a different story with the Sterling Ray34HH, though. We could have played it all day long and would actually go so far as to rate it as a better bass to play than an EB MM Stingray.

It has everything you could ever wish for if you want a massive, heavy sound to go with that trademark Stingray growl, making it more than worthy of any bassist’s attention.

MusicRadar verdict: These are both high-quality instruments priced to give food for thought to anyone who’s about to shell out the big bucks for the bigger reputation of the much-celebrated Music Man Stingrays.