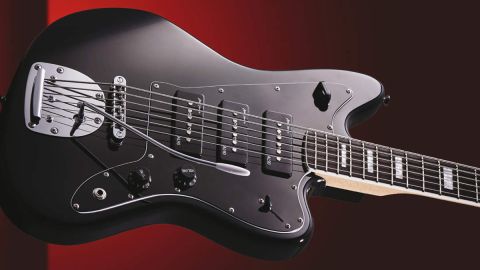 Guitarists switching to bass will love it to bits.

When the postman delivered the latest Revelation bass to my front door, on removing the packaging and unveiling the Revelation RJT-60B, my wife gave me a sideways look and said, “So you’re reviewing guitars now? You can barely play bass!” What a cheek...

Ignoring the splash of water as it cascaded off my mental mallard’s derriere, I set about examining this intriguing wee beastie. Is it a baritone guitar or a dinky six-string bass? Let’s have a closer look and try to discern its secrets, which for a penny under £300 seem to be generous in number.

Based on the design of the Jazzmaster guitar and Fender Bass VI, this is a well put together instrument that looks seriously cool. The all-black okoume plywood body has a tasteful gloss finish, and the stylish cutaway on the headstock and the vintage-style controls - all of which are sturdy and function smoothly - add to the retro vibe. The short scale 30” C-profile neck offers 22 medium frets, with pearloid block inlays, and the four-bolt neck joint appears tighter than the proverbial gnat’s chuff.

In fact, this is as solid and neat a construction as you can expect at this affordable price, with no sharp fret edges manifesting themselves when handling or playing; you have to look really hard to find any evidence that this is a budget guitar. We’re not massive fans of the forward-facing 90-degree jack input, but that’s hardly a deal-breaker, is it?

The Revelation is more than comfortable to play, whether you’re seated or standing. It has a perfectly weighted balance between body and neck, and acoustically it noodles just great straight out of the box. There’s some fret rattle around the low end of the neck, but this is nothing that a quick setup wouldn’t put right, so we’ll move on.

When you plug it in, prepare to be surprised by the bass roar. This is a little axe with a big voice, and a really pleasing, full, low-end response, with plenty of growl and sustain. It’s all rather confusing, in fact, holding such a diminutive instrument yet getting such fat bass notes falling out of your rig.

There’s a five-way slide selector to choose between the three high-output pickups - you can select from bridge, bridge/middle, middle, middle/neck, and neck - and a rotary Varitone control to toggle between the various ATN-5 circuits, where Revelation have included a variety of pre-set tones. Turn it all the way towards the pickups, and you disengage the ATN-5 altogether; turn it one increment towards the neck and you engage the ‘vintage/surf’ tone, one more to get the ‘country/rock’ tone, one more for ‘blues/rock’ and one more for ‘jazz’.

Inevitably, the string spacing is very narrow, which this banana-fingered bassist definitely struggled with. It’s doubtful that slappers will be able to do their thing effectively on this mini-bass, but it’s great for soloing, string-bending and tapping, not to mention playing chords. The detachable tremolo arm is a lot of fun too, if you want to throw in some tasteful vibrato, and everything seemed to stay in tune just fine once the new strings had settled down.

So let’s return to our original conundrum - is this a bass or a guitar? In fact, it seems to sit in the middle ground, depending upon what you string it with, how you decide to tune it and what you play it through. It will no doubt have bassists scratching their heads and guitarists delighting in the lower notes they have at their disposal. Still, even if you viewed it as a guitar with bass strings on it, the Revelation would be useful as a transitional instrument, especially for guitar players keen on laying down bass-lines with a minimum of fuss and effort. The thought of confusing audiences by standing on a stage with what looks like a guitar but sounds like a bass is also wonderfully appealing...