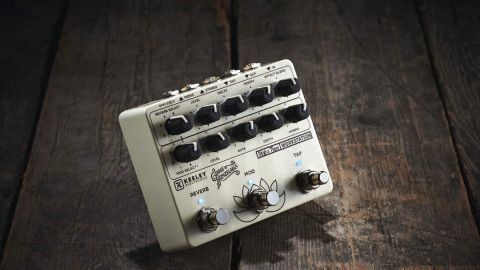 The perfect companion to add airiness to any amp without built-in reverb.

Recreating the vibe of certain Fender amps, the pedal that combines reverb and tremolo is a whole new sub-genre personified to many by the Strymon Flint and taking in the likes of the Mr Black Deluxe Plus and the recently released Source Audio True Spring.

Keeley is not exactly strangers to the idea, having had the Hooke and Vibe-O-Verb in its roster, but now the company has gone the whole hog and brought out a definitive tremolo and reverb pedal in two versions.

While there’s a single footswitch model of the Verb O Trem available, the one we’re taking a detailed look at here is the Eddie Heinzelman Signature Vibe o Verb Workstation, designed in collaboration with the signatory session musician/ sideman and featuring two dedicated processors, one with eight reverb types, the other with eight modulation variations.

Neatly laid out with a top row of knobs controlling reverb and a lower set for modulation, this is a pedal that manages to pack in three footswitches, despite being a pedalboard-friendly 120mm wide. Further control can be gained through an external tap footswitch and/or an expression pedal that offers control over the length of the reverb decay for such things as eking out the tail of long sustained notes.

The eight reverb types are actually six different reverbs: two Springs, a Plate, Hall, Chamber and Room, plus a Fugue effect with octave shifts, and Slapback, a delay. All have control over Level (dry/wet mix), Decay time (Feedback for Slapback mode) and one other effect-appropriate parameter via the Morph knob. The section also has an overall output level knob, as does the Trem section, allowing flexibility for dialling in a boost (or cut) and blending the two effects sections. The Modulation section takes in five trem variations, plus pitch vibrato and emulations of a rotary speaker and Uni-Vibe, all with adjustable Depth and Rate and a unique Morph parameter.

The reverbs cover all the conventional choices well, delivering plenty of options to place your playing in a sense of space, including a really good emulation of built-in amp reverb provided by the 2- and 3-Spring types. The Slapback setting, while still brilliant for a rockabilly slap, is a bit of a misnomer as it can go beyond typical slapback values to about 180ms of delay, opening up a wider range of usage with repeats nicely voiced like an analogue BBD. The only oddball here is Fugue, with adjustable octave up and octave down. The upper octave adds some sparkle in the vein of a shimmer reverb, but the fact that there’s no control over the actual dry/wet level of the incorporated reverb may limit its use singly, although it definitely would find a role combining with one of the modulations to create a huge off-the-wall composite effect.

There’s a lot to be explored among the modulations, particularly using the Morph knob, which can stretch them beyond their nominal function. The Sine tremolo, for example, can morph towards an edgier photocell trem, and you can get more aggressive with the square wave – think the chopped-up organ intro to Won’t Get Fooled Again. Pitch Vibrato will give you that Lonnie Mack Magnatone amp vibe, but you can turn up the dry level for phasing. Rotary and UVibe further broaden the appeal: the UVibe can shade between the vibrato and chorus modes of the original pedal, while the Rotary’s horn/drum blend morphs the flavour from Fender Vibratone to a larger conventional Leslie.

Okay, we admit you’ll get more variation from a full-on multi-effects pedal, but the versatility here goes way beyond others in that ‘reverb and trem’ genre we mentioned earlier. There are 16 single effects and 64 combinations, expanding beyond the spring reverb and amp tremolo conventionality, and offering the chance to dial in some unique flavours. With that in mind, some may regret the lack of presets to store them, but the simple hands-on functionality means you are never too far away from recalling a favourite setting.

The largely traditional/vintage sounds should appeal to those who play more rootsy music styles, but the functionality here makes it a fine utility addition to any player’s signal chain. It’s the perfect companion to add airiness to any amp without built-in reverb, and, that said, it’s a great choice for pairing with your favourite amp-flavoured drive pedal for a minimalist go-anywhere pedalboard that should get you through any gig where it’s necessary to use an unfamiliar amp.