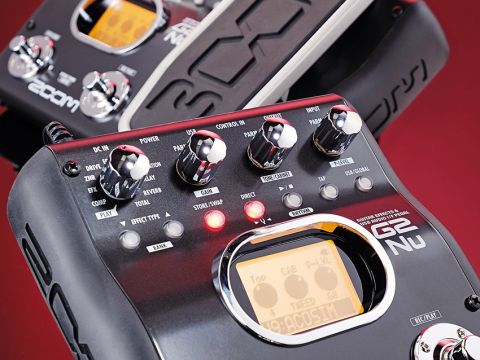 Practical and affordable processors for practice, gigging and computer recording.

The latest floor-based effects processors from Zoom are designed both for live use and, by functioning as a USB audio interface, for recording. The G2Nu and the G2.1Nu are identical to each other apart from the fact that the G2.1Nu packs a pedal treadle as an integral part of the design (we'll refer to both as the G2 from now on).

What you get is a multi-FX pedal that features 100 preset and 100 user patches based on modelled sounds, 40 onboard rhythms, plus a looper with up to five seconds of looping. Cubase LE software is also included.

Some Zoom pedals, such as the plastic-bodied G1U, may have seemed a touch fragile for serious stage use, but we have no such qualms about these two, which feature a metal top surface with rubber side cheeks and solid metal footswitches.

Power comes from six AA batteries or the supplied 9V DC power adaptor; alternatively, either unit can be powered from a USB bus if you're using it with a computer.

Patches in the G2 are stored in banks - there are 10 banks for the presets and 10 for the user patches. Patches are instantly selected by the two footswitches, which respectively scroll upwards and downwards through the whole lot.

If you want to jump to a specific bank there are a pair of small front-panel buttons that will scroll through the banks in the same way. Should you wish to jump directly from one patch to another that isn't adjacent to it, there is a 'pre-select' mode that lets you select the next patch in advance with the right footswitch, and you can then make it active by pressing both footswitches simultaneously.

Each patch is constructed from a set of nine modules (compression, EFX, noise reduction, drive, EQ hi and lo, modulation, delay, reverb) arranged in a set order to make the signal chain.

Several of the modules have a choice of effects: EFX for example, lets you choose one of nine effects that are usually placed before an amp, including three different wahs and tremolo. In all, over the whole range of modules, there are 83 effects.

Editing of patches is easily and quickly carried out by four chrome knobs - the first acts as a selector, while the other three are soft knobs that relate directly to the parameters that are clearly laid out in orange and black graphics in the display window.

The default setting of the selector knob is 'play'. When set thus, the footswitches scroll through the patches and the three soft knobs, by default, adjust the gain and tone of the drive module and the overall volume of the patch. Each of the other positions of the knob calls up the editing windows for each effect module.

As the G2 is designed to work both in front of an amp and also as a direct source of fully produced sounds to a mixer, computer or headphones, you have the choice of globally turning speaker simulation on or off using the dedicated direct button - choices of speaker cab type are accessed via the central soft knob.

The patches, offering a wide range of amp and effect tones to suit many styles, are arranged in categories, the largest of The G which is the 'artist' category with each patch offering a sound from a named player, most related to a specific song.

Some of these are classic rock sounds (Hendrix, Clapton, Page and so on), some a bit off-the-wall but still well-known (Joe Walsh's Rocky Mountain Way talkbox sound recreated in all its churning glory), some more obscure (Marc Bolan through an HH amp anyone?).

While not all the sounds could be described as slavishly accurate, they do offer a familiar flavour and are interesting in their own right regardless of claimed pedigree. Elsewhere, Steve Vai gets his hand in with 20 of his own creations, including some ethereal floaty concoctions.

Other factory patches include examples that showcase a single modelled amp or a single effect, and these could well be used to complement your other effects pedals.

The majority of patches feature overdriven and distorted sounds showcasing the completely redesigned drive module, which Zoom tells us features the most realistic models the company has ever created. These include 10 well-known named amps and 10 overdrive, distortion and fuzz stompboxes, as well as 10 original sounds created by the company.

There are certainly plenty of different shades of dirt on tap here, from the crunchy, to the sort of harmonically rich tones that just want to keep on sustaining. Regardless of whether you like the preset patches, they're really just starting points to create your own sounds and with the range of amp models and effects onboard, plus comprehensive EQ, you do have a massive amount of variables.

Getting stuck into creating sounds we soon found that some patches we thought were a touch bright could easily be toned down - not only is there a tone control in the drive module, but six carefully chosen bands of EQ to tweak - and there were plenty of clean amp sounds as well as overdriven.

Add in the many variations on the conventional guitar pedal effects, plus more esoteric stuff such as ring modulation and various pitchshifting options, and there's a huge tonal palette available for recording.

Editing of these can be done extremely conveniently as a USB-connected G2 becomes a two in/two out audio interface, allowing you to record your whole effected guitar sound directly to computer while monitoring the computer's output from a pair of headphones (or active monitors) connected to the unit's output.

A direct monitoring capability lets you hear your playing completely in sync with no latency delay. Practice is well catered for too, with the onboard rhythm patterns to play along to and the looper to record, play back and overdub phrases.

Either G2 would be a dependable choice sitting on your tabletop or carpet for practice or for recording a fully processed sound directly to your computer. Both are also rugged enough for stage work, although you might find your feet at strange angles as both footswitches need to be pressed simultaneously to bypass the unit - you could, alternatively, connect an external footswitch to the rear panel control socket.

Both of these units also offer decent value for money. The G2.1Nu with its treadle offers more control over certain effects but the G2Nu isn't at a total disadvantage, as it can take an expression pedal in the control socket and, with street prices under £100, might seem more of a bargain if your budget is tight.