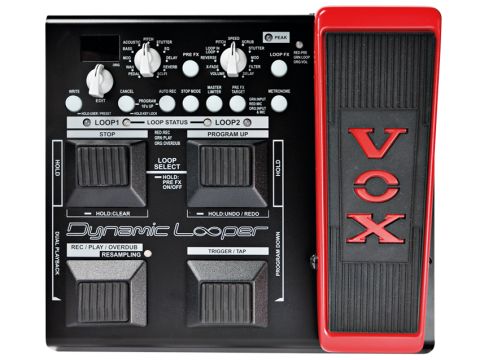 An effective performance tool if you want to create something a little different.

There's little doubt that a looper can offer plenty of creative possibilities, whether you're jamming along with yourself or taking it onstage to build a multi-layered performance that will enthral any audience, making them wonder how the hell you're doing all that with just two hands.

And it's that live performance idea that Vox seems to have in mind with the new Dynamic Looper - a floor pedal that allows you to create, play and dynamically control looped phrases in real time, something that it says promises "unprecedented new dimensions in live performance". Let's dive in…

The crux of the Dynamic Looper is that it can provide two independent loops at once, with a combined loop length of up to 90 seconds, while offering a degree of control over various parameters via a wah-style pedal treadle.

There are 11 types each of these Pre and Loop effects and the Dynamic Looper has 100 onboard programs (50 preset and 50 user), each of which offers settings for the Pre effect and Loop effect, and the assignment for the pedal treadle.

In addition to being able to use the Dynamic Looper with a guitar, there is also an XLR mic input should you wish to use it with vocals, although there's no phantom power so it's dynamic mics only.

Four footswitches control the basic operation of the VDL1. The lower left initiates recording, a second push on it sets the loop length and begins playback while a third starts you off overdubbing, which you can do infinitely until you push the switch again.

If your hand and foot co-ordination isn't that great, you can also set up the VDL1 to commence recording a loop automatically as soon as you hit the strings. The top-left footswitch stops playback.

There's a metronome to help you keep time and loop quantisation for creating specific beat-length phrases that automatically loop on the beat, with the bottom right footswitch offering tap tempo.

Pre-effects are recorded into the loop with your guitar and each of the 11 categories has a number of effects to choose from with some editable parameters - for example, the modulation effect offers a couple of choruses, flanger, phaser and tremolo, while the pedal effect has a compressor and emulations of a Klon Centaur, a Tube Screamer and a metal distortion pedal.

With a whole array of effects, you can have a different sound for each overdub you make to the loop and, as the effects also include bass and acoustic guitar emulations for your electric six-string, it can sound like a bunch of different instruments.

You can reach down and change the effects on the fly, but if you'd rather store them in a program you can use the top right footswitch to scroll up and load the programs or hold it down and use its lower neighbour to scroll down the list.

Loop effects can be applied to the loop as it is playing and these include plenty of interesting stuff such as slowing down the loop, pitch change, reverse and stutter - all controlled by the treadle.

You can also use a Resample function to re-record a loop as it's being modified by the loop effect. Simultaneously stepping on the two top footswitches switches from loop one to loop two, so you can record a second loop while the first is playing. You then can play the loops separately or together or use the treadle to morph between the two of them.

There are three options that determine how a loop ends, other than immediately when you hit the stop switch, and an onboard limiter function to reduce volume discrepancies between loops one and two and to maintain consistent levels for any overdubs.

Overall, there's a versatile palette of effects that you can apply at various stages of looping and some truly stunning sonic results can be achieved by layering the sounds and performances on top of each other.

It takes a little while to get comfortable with the VDL1's footswitch functions such as holding two pedals down at once or holding one down while pressing another - but it's not too difficult really (step on the upper pedal with your toe to hold while using the rest of your foot on the lower pedal) as the switches are ergonomically laid out.

It's a shame though that there isn't a more user-friendly foot-operated bypass for the pre-effects if you want to use a dry guitar sound; you have to hold the two upper pedals down, which is not easy and seems to take an eternity to activate.

This has other implications in using the VDL1 purely for a range of effects (it could be a versatile all-rounder such as the Line 6 M5).

Okay, we know that effects processing isn't its primary function, but a simple tap on one of the lower pedals (or even an optional added footswitch) for effects bypass would have greatly increased the versatility of the VDL1, giving it real alternative performance capability at those times you didn't want to use looping. Oh well…

So is there anything else that we don't like? Well, the size of the memory, or lack thereof, could be an issue. For live performance looping of the type that the VDL1 was intended, 90 seconds is plenty. We only have to look back at the sort of stuff John Martyn did with an Echoplex to see what can be achieved with short loop lengths.

However, by its very nature, creativity of this type can lead to something that you might want to keep after you turn the pedal off. You can always record the analogue output, but onboard SD card storage and/or a USB output would have been a useful asset.

That's about the only thing though, unless you want to work in stereo, of course. Vox has gone for it with the VDL1 and created something different from the other loopers on the market - the fact that you can add so many effects to your loop and manipulate them in real time puts this in a class of one.

It may take a bit of practice to get your co-ordination with the unit to a useful level, but once you do, you'll probably never have so much fun with a guitar and a single pedal.