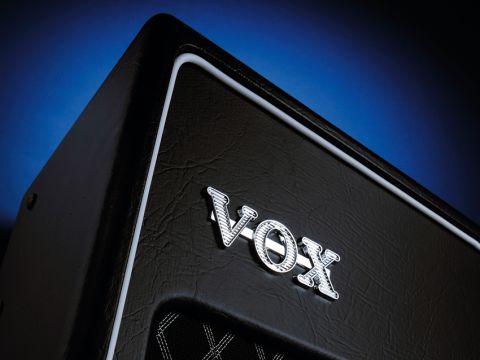 A good choice for straight-ahead blues and vintage rock players - check it out soon.

He may not be as well-known here in the UK as he should be, but Tony Bruno is one of the world's pre- eminent custom amp builders, hand-crafting a small range of designs from his New York workshop, topped by the EL84-powered, award-winning Underground 30.

Over the years, Tony has lent his talents to Vox's UK-based R&D team on more than one occasion, including for the hand-wired limited edition 1990s AC30 and the Night Train range.

This year at NAMM, Vox revealed its first amp to feature the Bruno logo on the front. Co-designed by Tony and Vox, the TB35C1 is available in two combo formats - 2 x 12, or the 1 x 12 version we have on test here.

First impressions of the TB35C1 are that it's a neatly proportioned combo. It's finished in satin black vinyl and features oversized white piping surrounding a speaker grille with diagonal silver stripes, echoing the original Vox fabric.

The black control panel, ivory chicken-head knobs and distinctive Art Deco lettering are very similar to what you'd find on a real Bruno and lend the TB35C1 a dash of cool, vintage appeal.

The vinyl covering looks better from a distance than it does up close, but it has been applied fairly neatly. Far-Eastern vinyl tends to be somewhat thinner and less pliable, showing up any imperfections in the cabinet. However, this sample is practically perfect, apart from a small wrinkle on one corner.

Despite being compact, the TB35C1 is fairly heavy, due to generous mains and output transformers. There's also a choke and another small transformer for the valve-powered reverb. Thankfully, a pair of handles on the top make carrying much easier.

The electronics are contained in a traditional AC30-style L-shaped steel chassis, with the preamp circuitry positioned vertically and the power supply, transformers and output valves sat in a separate, horizontally aligned compartment.

As you'd expect, the components are mounted mostly on printed circuit boards, with one large board supporting the front panel controls and preamp valve bases, and another in the horizontal compartment holding the power supply circuits.

The boards aren't through-plated, so they're not as well suited to being used in high-temperature conditions as a plated version, where each component leg is held by solder on both sides of the PCB for maximum reliability.

The four output valve bases are not board-mounted, but bolted to the chassis and hand-wired, unlike the preamp valves, which are deeply recessed, making quick replacement awkward.

This is less of an issue than usual, as the 1960s chassis design makes any fast valve replacement impossible - you have to undo four bolts on the cabinet sides and disconnect the speaker and reverb cables before sliding the whole chassis out.

Apart from our PCB misgivings, the build standard is generally quite good, with clean soldering and neatly piped wiring inspiring confidence. There's plenty of ventilation on this amp - three plastic grilles on the top of the cabinet, one on the rear and lots of perforations in the chassis, but no cooling fan.

The TB35C1 is a deceptively simple single-channel design, with high and low-sensitivity inputs and rotary controls for volume, bass, mid, treble and reverb.

There's also a master volume, which can be switched out, and two EQs: one operating a bass boost and the other giving you a more powerful footswitchable mid boost, called Macho.

The rear offers external and 'exstenstion' (sic) speaker sockets with switchable impedance, and a jack socket for the one-button footswitch. In keeping with the purist design, there's no effects loop.

At lower volume levels, the TB35C1 produces impressive clean tones from its single Celestion G12-65, with shimmering treble and a restrained mid-range that stops short of being too honky or nasal.

Using the bass boost adds plenty of extra meat to weedy single-coils and, with only a little tweaking, the TB35C1 rewarded us with some killer 'just on the edge' rhythm effects. The EQ interacts smoothly, with no nasty peaks.

Bruno amps are renowned for their spring reverbs and although the Vox doesn't have the three-knob reverb control of an Underground 30, it's rich and warm with a fairly smooth decay.

Hit the Macho switch and the mid-range receives a significant boost resulting in a smooth, harmonically rich overdrive tone that's reminiscent of Vox's Night Train head, but fatter and warmer, with more of an American influence, thanks to the quartet of cathode-biased Ruby Tubes 6V6s.

Rolling back some of the guitar's treble and turning the gain and volume up to around halfway puts you in Carlton/Ford territory. At this setting, the TB35C1 responds well to being driven from the guitar and cleans up superbly as you back off the guitar's volume to around three or four, with minimal loss of treble.

Turn everything up to 10, switch off the master volume and the TB35C1 provides a fat, toothy overdrive that's great for blues and classic rock, with plenty of bouncy dynamic response.

A tiny amount of DC at the input jack of this sample made the guitar's pots and switches a little more noisy than normal.

Our only other reservation was over the amount of thermal energy the amp kicks out - even after just one hour of use, the top panel of the cabinet was uncomfortably hot, with small air bubbles beginning to appear underneath the vinyl despite all the ventilation.

Class A amps get warm, but the TB35 gets hotter than most and we think a small cooling fan on the chassis would be a great help to this amp's long-term reliability.

Overall, the TBC could prove ideal for those who prefer a purist, vintage style of amp to play through. Despite the simple control panel, it provides a good range of responsive clean and classic rock overdrive effects at moderate volume levels, with the ability to sound convincingly British or American.

Maxed out, it's slightly less versatile and more of a good one-trick pony, but it should still appeal to many blues or classic rock players.

The Bruno credentials may have a greater appeal in the USA and Germany than they do in this country, as there's no UK distribution and less familiarity with the brand.

For that reason, even though street prices should be around the £950 mark, we think it could prove harder for potential UK customers to justify. There's also a lot of seriously heavyweight competition stacked up against Vox here.

Nevertheless, the TB35C1 is a good-sounding club amp that deserves to be heard - plug in and see what you think.