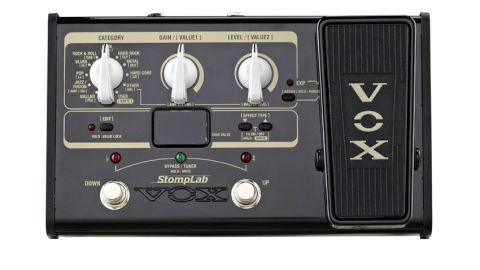 The StompLab is two things in one: an amp processor and multi-effects unit for home headphone practice that can be equally at home supplying effects on stage.

Floor-dwelling multi-effects processors for guitar have traditionally been rather large units, designed to fulfil all your sonic needs between guitar and amplification.

Trends change, though, and doubtless helped by the increasingly smaller amount of space you actually need for potent digital processing, recent multi-effects pedals have been seen in increasingly tinier footprints.

They also now perform a wider range of roles, such as a pedalboard-friendly jack of all trades that can usefully complement your existing pedals. The new Vox StompLab range of multi-effects units is the latest of the breed to exhibit the smaller footprint, and could sit comfortably among a host of conventional single-sound pedals, even though two of the models sport treadles.

There are four pedals in the StompLab range: the IG and IIG (that's 1G and 2G to you and me, but Vox likes roman numerals) are designed for guitar, and are identical apart from the fact that the IIG adds an expression pedal to control volume, wah or whatever parameter is assigned to it. The IB and IIB do the same thing for bass guitar. Here we look at the IIG…

The IIG, like all of the pedals in the range, features an onboard tuner and comes with 120 onboard memory slots, 100 of which are presets, leaving 20 opportunities to edit and archive your own sounds.

The unit can be used between guitar and amp, but the single output will also drive a set of stereo headphones for silent practice. You can practise anywhere you like, in fact, because power comes from four AA batteries, although in most cases we imagine users would employ a nine-volt adaptor, both for convenience and to keep costs down.

The factory presets and the user memories are accessed via a rotary switch, which selects banks - there are 10 banks of 10 user presets and a single bank that contains all 20 user presets. Two footswitches scroll up and down through the presets in each bank, loading them immediately.

Structurally, each preset is constructed from a chain of seven modules: pedal, amp/ drive, cabinet, noise reduction, modulation, delay and reverb. While there's one universal noise reduction effect, each of the other modules has a variety of effects that can be loaded into it.

In addition, there are eight delay options, plus room, spring and hall reverbs, while four output options also allow you to match whatever the StompLab is connected to: headphones or another line input, plus various amp types - nominally an AC30, Fender combo or a full Marshall stack.

Switching between the various presets is dead easy using the footswitches or the pair of front panel buttons, which also scroll through them all. Instant tweaking is available courtesy of two chickenhead knobs: one to control the amount of gain and the other controlling the output volume.

Vox says that the StompLab series is designed to be easily usable, even by novice players, which is why each program is named with a musical style, making it easier to find a sound without being concerned with specific effect names.

While the presets found in these banks could be said to be representative of the nominated genre, in many cases they're usable in other genres, too, so it's just a case of trying them out, seeing what you like and perhaps putting some favourites (maybe with a few tweaks) into the user slots.

Although there are some outrageously over-effected tones in there, the presets are generally very playable. We like this type of unit, because you can plug in and select a sound that you might not have considered using, or that's not possible with your usual rig, and find yourself getting creative - the actual sound inspiring you to play differently.

We really like the versatility provided by the IIG's treadle. Although tiny, it's surprisingly easy to get used to, whether used as a wah, or to increase the speed of a modulation effect.

The range of amps for guitarists covers just about all you'd need. Likewise, the range of effects covers a lot of ground, with the common and the esoteric side by side. They all work well in the presets, but many sound good enough to work in isolation when you separate them out.

Editing presets to create your own sounds is a matter of pressing the edit button and using the category selector rotary knob to select which module you want to edit. You can select the effect for each, or make it inactive and then tweak parameters using the two knobs.

The effects have up to two parameters each, but the amps have gain, volume, bass, mid, treble and presence. It's all pretty straightforward, the only slight niggle being that the screen supports two characters only, so you have to rely on abbreviations (all listed in the user's guide) to see what amp or effect you are calling up.

It would have been nice to have a little more tweakability (you only get delay time and mix for the delay effects, with different feedback levels stored with each of the eight delay types), but it's all perfectly workable, and it would be churlish to complain at these prices.

The unit can be bypassed or muted by using both footswitches simultaneously. Just hitting them bypasses all effects, while holding them down for a second or so mutes the StompLab's output. Both methods also bring the handy onboard auto chromatic tuner into play.

Our main thought on this pedals is that it's a more practical version of a desktop guitar processor - one that you can use as a genuine floor pedal, but still use at home. That said, you'd have to have seriously weird leg joints or be willing to stand on your desk to operate the treadle-equipped versions, of course!

Vox being a Korg company, we can see a similarity here to its Pandora range of processors, which have a similar architecture in terms of the multi-effects chain and range of effects available. So, yes, the StompLab series is excellent for just plugging in and having access to a massive range of sounds for practice through your headphones - and it's portable with it.

As a pedal plugged between guitar and amp, the IIG is certainly rugged enough for stage use, and probably small enough not to cause too much congestion on your pedalboard if you intend to use it alongside other pedals.

We'd be inclined to create presets with the amp modelling turned off if we were using the pedal with an amp, leaving the possibility of creating some composite effect sounds, or just limiting the preset to a single effect. That's 20 different single effects and a tuner that you can have instant access to if you don't mind hitting two footswitches at once, and that's really not at all difficult.

Finally, the most remarkable thing about this pedal is its value for money - you are getting a lot of bang for your buck here. What better way to start the New Year?