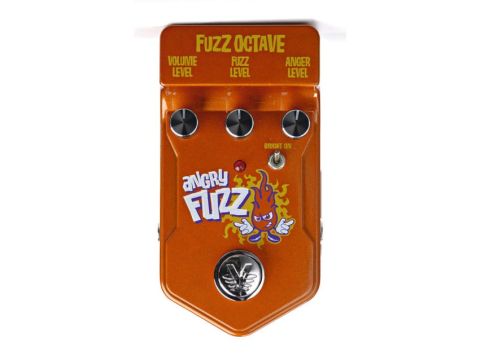 Don't overlook Visual Sound in your search for ultimate tone.

This new addition to the Visual Sound range is more than just a regular fuzz pedal, featuring as it does an octave circuit (like that classic Hendrix effect, the Octavia) and a bright switch.

The fuzz and octave effects (the latter marked 'anger') can be controlled independently, and there's also a volume level control.

To our ears, this is the best of the bunch. The retro stompbox craze has brought us all manner of squishy, ratty, flutey and plain nasty fuzz pedals, so we ought to be getting rather jaded, but the Angry Fuzz is a breath of fresh air.

Leaving aside the 'anger' and bright features for the moment, the pedal's basic fuzz sound is at the smooth 'flutey' end of the scale. By playing accurate, single-note lines with a high fuzz setting, the attack all but disappears on the high notes, while low notes have a nice cello-esque texture.

The bright switch is quite subtle, especially at higher fuzz settings, and is only really apparent on the attack part of the notes, so hit the strings harder if you want to hear the brightness! The real fun starts when you blend in the anger (octave) effect.

This is exactly what you hear on those classic Roger Mayer pedals, adding an insistent upper octave to single notes and creating ring-modulator-style mayhem when you play two notes together.

As usual, we got the best results by using the neck pickup on a Strat and turning the guitar's tone control right down; the bright control is a useful addition here, as it stops the tone from being slushy.

Lower fuzz settings also work well for gritty overdrive tones, with or without the anger feature. By setting the fuzz very low and the anger high, we were able to get some great percussive sounds reminiscent of a ring modulator.