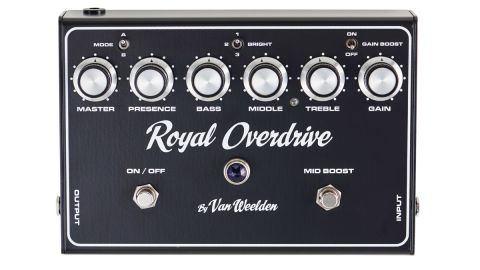 As you might expect for nearly £500, this is one excellent 'always on' pedal that offers a classy tonal foundation, whatever your rig.

Overdrive pedals are designed to work with your amp to make your sound a little or a lotmore overdriven, but not all overdrive pedal/ amp combinations are a marriage made in heaven.

The Van Weelden Royal Overdrive, though, takes things a bit further than most, being a complete solid-state guitar preamp with a set of features designed to work with any amp.

Designer Peter Van Weelden - who specialises in Dumble-styled amps, notably the Twinkleland, and can number Joe Bonamassa among his clients - has invested four years of his development time in this pedal, and it could be said that there's some of that Dumble DNA in the all-analogue circuitry, featuring over 400 parts.

Two toggle switches working in tandem are the starting point for setting up your tone. The first offers A and B modes, the second offers three Bright settings, the idea being that you get six options to pre-shape the tonal balance to work with any amp.

The manual offers some suggestions for both humbucker and single-coil-equipped guitars working with various amp types, but it's trial and error until you find which sounds best before you really start shaping your tone with the six knobs.

For our various amplifier- and-guitar combinations, we found that some of the six settings were completely dull or overly hissy, but that's all part of the design, and the sound came alive once we found the optimum setting for us.

This pedal is being promoted as a 'Dumble-in-a box' and, while certain Dumble-style characteristics are in there, there's more than a bit of Brit Marshall-style flavour, too.

The Gain knob works in conjunction with the Master knob to respectively dial in the drive andset the level of boost you send to your amp. For a more saturated sound, there's a Gain Boost toggle switch. The rest of the knobs are the same Presence, Bass, Middle and Treble controls you'd find on a guitar amp.

With all of that tone-shaping control, you can zero in on a comprehensive array of overdriven goodness up to the sound of a fully cranked stack.

It might be a pedal, but using the Royal Overdrive feels more akin to playing through a really good amp; there's real responsiveness to touch and notes bloom under your fingertips, all with a sound rich in harmonics and with loads of sustain, particularly if you step on the Mid Boost footswitch, which is naturally set for rhythm to lead transitions.