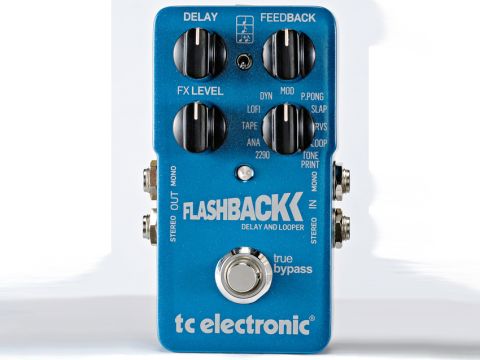 A contender for the most versatile compact stompbox delay available.

Denmark's TC Electronic is an effects legend. The last few years have seen the brand branching out into an innovative range of floor- and pedal-based products, including the genre-changing PolyTune pedal tuner and the successful Nova series stompboxes.

The Novas can be quite complex in operation, however, with scrolling memories, double footswitches, 12V power and so on, so the company has now launched a new range of pedals that are very much the opposite.

Here we're talking straight-up, simple stompboxes. You get a compact digital pedal that can run from a 9V battery or DC adaptor. Battery access is by removing the pedal baseplate via a large chromed knurled screw that needs a coin or screwdriver to initially loosen it.

Inside, there's a pair of DIP switches - one that selects a high quality buffer rather than the default true bypass switching mode (which is useful if the pedal is at the start or end of a long chain) and a second that offersdry kill for effect only, when the pedal is to be used in an amp's FX loop.

The default setting is for analogue dry through signal, where the dry part of the signal isn't converted and passes through the pedal at all times, even when the effect is active.

The pedal has four knobs - one of which is a rotary switch - plus a three-way switch, and features selectable effects variations.

In designing the pedal, TC wanted something that was fast, easy and intuitive to use, with the ability to change sounds on the fly with a few knob tweaks.

However, it was also aware that most stompboxes have a core sound - a basic tonality that's purely their own. Something that's fine if you like it, but that you're also unable to change if you grow tired of it. With this in mind, it set about building in a feature to allow access to a number of alternative sounds.

This feature is called TonePrint: the pedal has a USB connection that allows you to import a new sound, a custom 'tuning' of the pedal, from a computer and store it in a special onboard memory slot called up by the TonePrint position of the pedal's three-way switch (or the rotary switch in the case of the delay).

TC has made a number of these alternative 'tunings' available for each pedal, all easily accessed and downloaded into it from a special TonePrint website.

And these aren't just voicings created by some Scandinavian boffin in a white lab coat. Instead, TC has asked a bunch of the world's best guitar players to make TonePrints for the pedals.

The company has given them a specially developed tuning software that allows them to tweak every single aspect of the pedals - parameter settings, what range the pots should have, what the min-mid-max values should be, and so on, to make their own perfect pedal.

The Flashback recalls TC's Nova Delay in the number of distinct effects it offers. Its fourth knob is a rotary switch that can call up nine different delay effects plus the TonePrint setting as well as setting it up as a looper.

The smaller three-way switch sets the timing division for the tap tempo function and offers quarter note, eighth note or both for a multi-tap repeat pattern - tap tempo being implemented by pressing the footswitch and rhythmically hitting the strings (the pedal mutes when you do this).

Displaying a comprehensive selection of delay types, there's little extra that we could ask for in a delay pedal, especially one as compact as this.

The 2290 setting offers clean-as-you-like digital delay, but if you want degraded repeats, there are three different flavours of them as well as a lush modulated delay and a very useful dynamic delay that lets the repeats come to prominence at the end of phrases.

With 40 seconds in mono and 20 seconds in stereo, the looper offers a useful level of practicality, and whacking the strings for tap tempo makes perfect sense for guitarists.

This is an excellent pedal, and is sensibly priced. It would be very good value even without the TonePrint feature, but it's this that really sets it apart from the herd. TC has brought something to the table that other compact pedals don't have - effectively, this pedal is updatable.

The TonePrint sounds that came straight out of the box offer a useful and nicely programmed variation on the named effect but, as at the time of testing theTonePrint website wasn't live, we weren't able to try out any of the signature sounds.

Nevertheless we're pretty sure that the likes of Jeff Beck and Steve Vai aren't going to put their names to something that sounds less-than-good, so we expect there will be some cool sounds coming down the road.

As long as TC can keep up a constant stream of artists willing to share their sounds, you'll always have something new to try out.