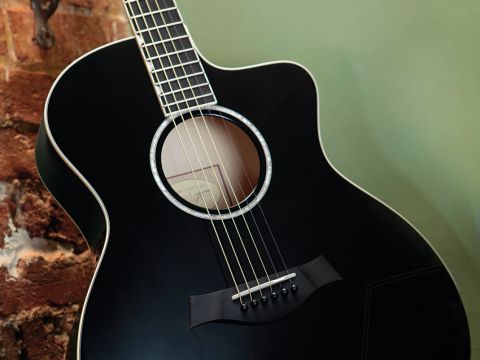 Hugely versatile with strong visual attitude, the DDX is a great all-rounder for the performing, recording or serious practising musician… even if you've never heard of Doyle Dykes!

By all accounts, Taylor has had a very busy 2011. The sheer demand for the fantastic GS Mini surprised the firm so much that this new Doyle Dykes signature, launched at the same time as the Mini at the start of this year, has only just begun shipping.

One of our 2011 NAMM show highlights, however, the Doyle Deluxe (DDX) is definitely worth the wait.

Like the GS Mini, the Baby Taylors and the 100 and 200 series, the DDX is made in Taylor's Mexican factory - a big reason why it's a third of the price of the £3,899 USA-made Doyle Dykes Signature model (DDSM).

While both use Taylor's most popular grand auditorium (GA) body outline, the DDX has a very different Venetian cutaway to the DDSM's pointed Florentine version. But even this cutaway is different to the Venetian style of the USA models. The 314ce, for example, is a GA but with a Venetian cutaway that's round-tipped but slightly upturned.

However, the Mex-made 114ce, still classed as having a rounded-nose Venetian cutaway, follows the line we see here: almost at right-angles to the neck, giving a distinctly different, more retro look. It's the same on the 214ce and also the NS24ce nylon-string, again Mexican-made, which has this flatter cutaway, while the USA-made NS34ce, and the models above it, have the upturned cutaway.

But that's not the only difference. While the tops on both are Sitka spruce, the back and sides here are laminated maple as opposed to solid big leaf maple. The back is unbraced but arched - the Taylor Mexican method, if you like.

The soundhole rosette here is smaller and less ornate, classed as faux pearl fishbone as opposed to abalone on the DDSM. Both necks are maple with bound ebony 'boards and Grestch-inspired pearl 'thumbnail' inlays, but hardware is gold-plated on the DDSM, chrome on this DDX; the headstock inlay is ornate on the DDSM and simply a Doyle Deluxe script on the DDX.

The US-made DDSM comes in black, trans black, natural, orange and brown sugar, while the DDX just comes in gloss black and there's no lefty option.

There are different electronics too. The DDX uses the ES-T undersaddle system (used on less expensive Taylor guitars) while the £3,899 DDSM comes with the full Taylor Expression System or optional LR Baggs unit.

Not least on price, the DDX might well prove to be more of a journeyman's guitar. The GA shape was designed to sit between the smaller-bodied grand concert (GC) models and the larger dreadnoughts.

The narrower (albeit by just 1.59mm) nut width won't please the diehard fingerpickers, but the rest of us will be happy enough, especially when that is combined with the electric-like slinky feel of the neck and set-up that has become part of Taylor's raison d'être. Quality too is a byword in Taylor's world and everything here is 100 per cent shipshape; only some slight imperfections in the notoriously difficult to achieve high gloss jet black 'varnish' finish perhaps hint that this is a lower spec model.

The finish is "a two-part material - resin and hardener - that dries to a flat finish, not that different to the two-part polyurethane on 200 to 400 series," according to Taylor. "The main difference is that varnish uses much less hardener in proportion than the flat polyurethane. Therefore there is a nice, soft sheen to it, instead of a more glossed look."

If the GA was designed to be halfway between a smaller GC and larger dreadnought then that, on first impressions, is how it sounds too. It doesn't have that almost growling deep low-end of a classic Martin dreadnought, nor the mid focus that's often expected from a smaller-bodied guitar.

Instead the low end is generous and roomy, but not over-powered, the mid-range sounds slightly scooped and the highs are clean and clear; it's almost as if what you're hearing is a 'produced' dreadnought sound, with its low end cleaned up and some air given to its tonality.

The string spacing is certainly a strummer's dream and the resulting sound shouldn't give either a studio or live engineer any problems whatsoever. Hybrid pick/finger styles are also easy, though die-hard fingerstyle players will probably prefer more space, especially in the lower fret positions.

Electric players going 'unplugged', however, will love it, not just the spacing but also the super slick playability.

The standard Taylor volume, treble and bass EQs may seem a little basic, compared to many brands, but there is a phase switch on the internal circuit board, accessible through the soundhole - not ideal in the heat of battle. However, it's a nicely voiced system: not too much piezo 'quack', good balanced volume across each string, plenty of high-end zing and enough EQ control for tailoring your basic sound.

For trickier acoustic environments you might need an outboard preamp (not to mention a notch filter) but that's a personal choice; quite often over-complicating an onboard preamp can lead to numerous bad sounds in the wrong hands. Here, to be fair, with the EQs near their central position it's hard to get a duff sound.

Like Martin and Fender, Taylor's Mexican factory enables a higher volume, low-cost product compared to the pukka USA production. Some people might sneer at that, but for most cash-strapped wannabee or working musicians it's a hugely attractive proposition.

This DDX is case in point. It utilises all of Taylor's vast production experience to produce an instrument that's extremely well designed and made, but which also lacks little tonally despite its laminate back and sides and ES-T undersaddle pickup system.

It's fit for purpose with a kind of 'produced' dreadnought tonality and electric-like playability and intonation. While it might not suit diehard fingerpickers, it'll certainly cover virtually everything else.

And in a market flooded with beautiful woody-look flat-tops, its black-only finish brings a purposeful vibe to proceedings. Well worth the wait indeed.