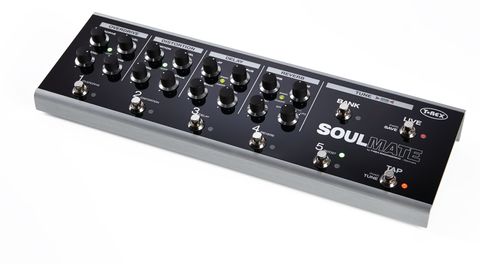 Anyone after a fuss-free alternative to modelling multi-effects and pedalboards would do well to find their SoulMate.

Not everyone enjoys the usual multi-effects trawl through screens of signal chains, yet stompboxes present their own problems: loose jacks, dodgy patch cables and knackered power supplies among the most persistent offenders. What's a guitarist to do? T-Rex reckons the SoulMate's the answer.

Essentially, the SoulMate is five T-Rex pedals in one: the Møller overdrive, Mudhoney distortion, Replica/Reptile delay and Room-Mate reverb, plus a separate boost, controlled by five effect footswitches. The furthest-right switch acts as a tap tempo for the delay and, held down, activates a built-in tuner, viewable via a bright display on the top-right of the unit.

While you can operate the pedals as individual stompers (we reckon that's how most guitarists will use the SoulMate), there's also the ability to create presets, which you can assign to the five footswitches.

And for anyone looking to stick a modulation pedal into the mix, T-Rex has included an effects loop positioned post-dirt, pre-delay in the chain - there's even a power output jack for extra stompers, although its 12-volt rating won't suit all pedals.

T-Rex designed the SoulMate with gigging guitarists in mind, and judging from its substantial 2kg enclosure, it will survive stomps from the most gargantuan of clodhoppers - it even comes with its own gigbag, and trust us, these tones are worth protecting.

For starters, the overdrive has a pushed-amp style grit, with a bright tonality and slight mid hump, plus an effective blend control for balancing break-up crunch with your natural guitar tone - so much so that you may never want to switch it off.

The distortion ups the ante with everything from crunchy 'Plexi'- style dirt to full-on British-style chunk at higher levels of gain, while the presence control dials in harsher sounds for filthy metal grind.

Combine all that with the almighty boost (controllable via a small dial on the rear), and there's huge potential for dirt textures.

There's not quite so much versatility in the delay and reverb sections. The former offers one setting: a modulatable tape-esque decay, where the low-end gradually rolls off the repeats, while the latter provides four 'verbs (spring, room, hall and LFO), none of which take you into ambient territory, but liven up a dry tone. Whether they're extreme enough for your tastes or not, you'll struggle to get a bad sound.

We love the SoulMate concept - it encourages you to play more and worry less, while providing a smattering of sonic options.

Whether it's worth £459 is another matter, particularly if these effects aren't to your liking - a six-strong pedalboard may cost more, but at least you have the option of swapping a few pedals out. That said, there's great potential here.