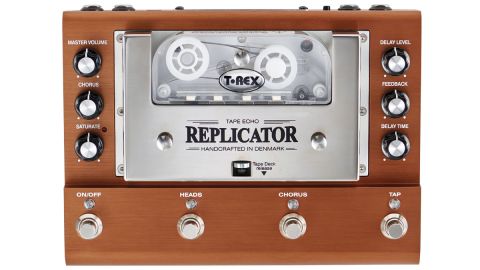 Here's the opportunity to own a real tape echo, endowed with a practical feature set in a compact stage-ready form.

In the age of digital modelling, when just about every effects-pedal company is trying to recreate the sound of tape echo digitally, those resourceful boffins at T-Rex have actually released the real thing in a brand-new design.

The Replicator takes the classic electro-mechanical blueprint of analogue tape running past recording and playback heads, marries it up with some modern features and puts the whole caboodle in a stompbox-styled unit. Phew!

Powered from the supplied 24-volt adaptor (or a power distributor that has 24-volt capability, such as T-Rex's Fuel Tank), the Replicator isn't vastly bigger than, say, a Line 6 DL4, so could be at home sitting on a pedalboard, if not directly on the stage, although you'd perhaps be a little more careful with it than most pedals as it contains (admittedly well protected) moving parts.

T-Rex has designed the Replicator around a clear plastic tape cartridge with a short loop of 1/8-inch BASF chrome tape, clearly visible as it passes in a circuitous manner around an intricate pulley system.

Tape, of course, does deteriorate and wear out, so the cartridge will have to be replaced occasionally, but replacement is dead easy, taking less than a minute, and the Replicator comes complete with a spare.

An on/off footswitch engages the circuitry and sets the tape in motion. The Replicator works like any tape echo by recording your signal on a record head, playing it back via a replay head for the repeat and then erasing it via an erase head.

There are, in fact, two replay heads here. Head 1 is twice as far away from the record head as Head 2, so is suitable for longer delays; the tape speed is set by a knob to determine the actual echo time.

You can select either head, or both together, with another footswitch that toggles through the options. Head 2 is set to output at a lower volume relative to the other, so with both engaged, there's an interesting pattern-style alternation in the volume of the repeats.

To set up the sound, you get an overall master volume knob (with 8dB of extra gain if needed) and a knob for the level of the repeats, which really needs to be set in conjunction with the Saturate knob. This determines how much signal is fed to the record head - you can turn it up to change the character of the repeats, taking them from clean and tight through to overdrivenand squashy to downright nasty. Higher settings of saturation require lower levels of delay volume.

As with all echo and delay units, the feedback knob sets the number of repeats and can go from a single repeat to self-oscillation and dub-style effects - something that can really be exploited on stage as you can connect an expression pedal to control the feedback.

There's also provision to connect another expression pedal to control the delay time. While a bit of wobble is natural with real tape, T-Rex has also included a footswitchable chorus effect (depth set by a knob) that applies modulation purely to the repeats to emphasise pitch fluctuations, but can also add a spaciousness to the overall sound.

Also, remarkably for an electro-mechanical unit, you get a Tap Tempo footswitch, plus there's a Kill Dry switch enabling placement in an effects loop.

If you've used tape echo, you'll know to expect a sound that blends ever so naturally with your guitar, and this has it. It is, though, a warts 'n' all tape echo, so if you are looking for squeaky clean, consistent-repeat- each-time sound you probably won't want this: it is a machine that's proud of its artefacts, notably repeats that can get progressively wayward.

Also, bear in mind that the four heads and the pinch rollers - in fact, any part that comes into contact with the tape - will have to be regularly cleaned with isopropyl alcohol.