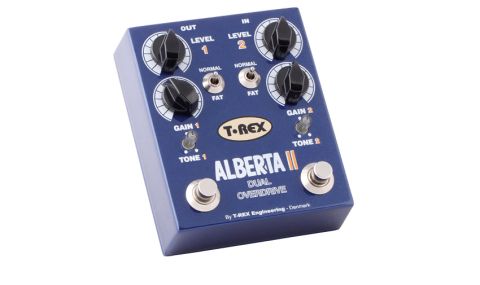 T-Rex has managed to satisfy fans of the original, while adding enough new features and versatility to entice players who have yet to pay a visit to Alberta.

There's a legend behind T-Rex's latest overdrive. Players of the original single-channel Alberta loved it so much, they would use two of 'em: one for rhythm; one for higher-gain lead. And thus, the Alberta II is born, with two channels of classic American dirt, plus a pair of fat switches for extra low-end punch.

Kick in channel 1 and you're greeted with a Tube Screamer-ish drive that's smooth and creamy, and retains plenty of your guitar's character. Channel 2, however, is voiced to provide a more open sound that's not as thick and compressed as 1. So, 2 is your trip for break-up rhythm sounds, leaving 1 for searing hot solos.

The Alberta II's strengths lie in meaty medium-gain tones, providing plenty of grunt for raunchy Texan blues or ballsy drop D riffing. Unfortunately, you can't run both channels together, so this isn't the pedal for overdrive-cascading gain freaks.

Guitarists far and wide will love those two new fat switches, though: flick them on for solo playing, then back to normal to let the bass handle the low-end for gigs and recording.

With the Alberta II, T-Rex has managed to satisfy fans of the original, while adding enough new features and versatility to entice players who have yet to pay a visit to Alberta, too. Not bad for a sequel.