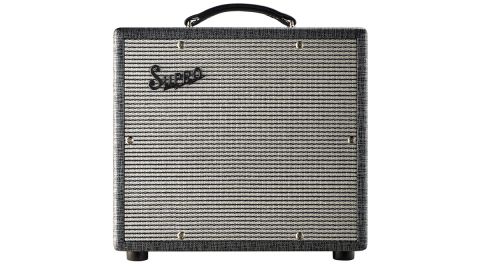 If vintage tone and looks are what you're after, then Supro's Comet should definitely be on your radar.

Supro's return to regular production is one of the most anticipated relaunches we've seen in recent times.

Now owned by New York-based Absara Audio of Pigtronix pedals fame, the new models are made with care and respect for Supro's extensive heritage, perfect for the current pedalboard trend as well as providing authentic vintage tone when used on their own.

Here, we're looking at  a new addition to the Classic range that promises to be one of Supro's most popular amps yet, the reverb and tremolo-equipped 1610RT Comet.

The Comet name has a lot of resonance for Supro and the wider guitar universe. It was used on amps and lap steels made by Valco in Chicago as far back as the late 1940s and early 1950s. The smaller 1x8 amps were also very popular for harmonica, making them an integral part of what came to be known as the Chicago blues sound.

The modern Comet certainly looks smart in its 1959-styled cabinet, with black 'rhino-hide' vinyl and silver grille cloth accented by a neatly-executed white stripe with black stringing that wraps around the cabinet sides. An oval cut-out in the rear baffle reveals a single 10-inch loudspeaker, together with a traditional spring reverb tank.

Like all modern Supros, the Comet uses a printed circuit board for nearly everything, including the front panel controls and valve bases. The board quality is excellent, with big metal film resistors for durability and low noise, exceptionally neat wiring and bright soldering.

The Comet's Inca gold control panel is straightforward and easy to understand - although the lettering is upside down when viewed from the front, because it was common in the pre-stack era for guitarists to put small amps at stage front and stand behind them.

There are just two controls for volume and tone, together with a level control for the Comet's reverb, and speed and depth controls for the integral tremolo effect. As well as toggle switches for mains and standby, a third toggle lowers the plate voltage to the single 6L6 output valve, reducing power from 14 watts down to a more recording-friendly six watts.

The Comet looks the part. We like the retro cabinet design, which is compact and portable, while the build quality inspires confidence. Behind those good looks, the Comet is hard as nails, made for extended use and non-stop touring.

Here's an amp that switches on quietly and smoothly, taking a few seconds to warm up to operating temperature, after which the voltages stabilise and the amp becomes remarkably hiss and hum-free, making it an ideal partner for both home use and recording.

The Comet's very vintage tremolo is created in the preamp section before the reverb send,  so the rich, long-delay reverb envelops the sound, rather than being truncated by it.

The single preamp channel has above average gain; it's easy to push into overdrive, but with enough headroom to retain clarity at higher volume levels. This increased gain - combined with the fat, even order harmonics of the single-ended Class A 6L6 output stage - gives the Comet a very responsive feel with a toothsome bite when you dig in.

Max out the volume and there's a respectable crunch with tweed and AC15 overtones that's equally good with single coils and humbuckers, and that perfectly nails a Chicago blues vibe. At this level, the tone control is superfluous; the sound is so thick you need it wide open to keep things balanced.

The effects are superb, too. The Comet's very vintage tremolo is created in the preamp section before the reverb send,  so the rich, long-delay reverb envelops the sound, rather than being truncated by it. Played like this, the Supro is full of vintage character, pushing all the right buttons for 60s pop, blues and rock.

Classic Stones and Earl Hooker licks sound totally authentic, thanks in part to the superb 10-inch custom loudspeaker, which delivers volume levels that easily fill a small venue. One minor disappointment is that the effects can't be switched remotely - reverb isn't really an issue, but it would be nice to be able to kick the tremolo in and out for emphasis.

There's very little not to like about  Supro's new Comet, as long as you're into amps that look and sound authentically vintage. While there are no effects  loops, footswitchable boosts or similar concessions to the 21st century, what you do get is unadulterated tone from a preamp that responds to every nuance, from earthy, gritty blues to classic pop, in a highly portable package.

The Supro has its own distinct voice and character. It's great on its own or with pedals, and if you add the 1x12 extension, you've got a superb rig, loud and compact enough for smaller gigs as well  as rehearsal and home recording.

The price tag really deserves some justification, because the Comet isn't the cheapest 1x10 combo out there. Designed and R&D'd in the USA, the Supro's parts are assembled in the Far East, before being shipped to Absara's facility in New York for assembly and quality control by staff who absolutely understand the Supro sound and its place in America's 1950s zeitgeist.

Importantly, Supro has opted to use a traditional distribution model, with support in the UK entrusted to one of our biggest and most well-known distributors, ensuring customers and retailers get a standard of back-up worthy of this famous brand - something you can't always rely on when buying direct from a one-man importer over the internet.

We think with all this taken into account, the Comet's price is fair for an amp that carries one of the biggest names in American musical instrument history.