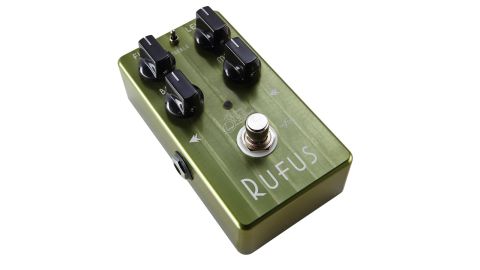 A fuzz for all seasons, with variety and versatility in spades.

Silicon transistor-based, the Suhr Rufus has more tonal tweaking power than many fuzzes as it features both a three-band EQ, and a three- position treble switch, which can be used to cut or boost the amount of high frequencies.

It also has two modes of operation: normal or fat (with increased low end) that can be switched between by holding down the footswitch - the LED lights up green or red respectively. Alternatively, this can be carried out by an external footswitch, which can be set to latching or momentary action.

Delivering great-sounding fuzz whether you like thick sustain or edgier garage/grunge-type sounds, this pedal has practical options and is not finicky about positioning on your 'board, as it accepts the output of a buffered device.

Fuzz pedals can be very 'niche' but the Rufus transcends that by virtue of its tonal variation, twin voices and signal chain flexibility. It's not cheap but it's a fuzz that's more versatile than most.