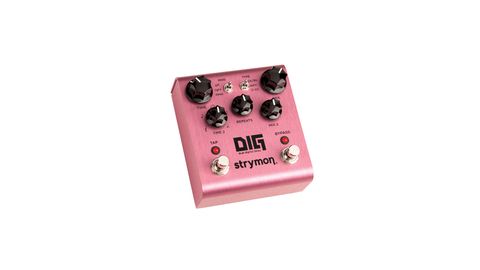 For spacey ambient sounds, it's a wise investment, and you can even keep delays repeating continuously by holding down the tap footswitch - how cool is that?

If you fancy a delay pedal with sounds a little different from the normal digital delay fare, the Strymon DIG - which boasts two simultaneous delays, one synchronised to the other - might be just what you're looking for.

It's not just about dual delays, though; the DIG also revives the sound of early digital delays, just like other pedals strive to recreate the sound of tape or BBD analog units.

While the pedal can output modern pristine 24-bit, 96kHz sounds, it also aims to recreate older rackmount digital delays from a time when the technology wasn't as advanced as it is today, and the repeats had a distinct sound of their own.

One of these is known as ADM (adaptive delta modulation) one-bit delay, which produces repeats with a distinctive envelope, like a percussive snap at the start, which works extremely well if you want prominent rhythmic delay in time with the music you are playing, driving it along like The Edge in early U2.

The other choice offers 80s -style12-bit repeats - again, not quite as pristine as the 24/96 sound and with a darker and warmer tone. As with any Strymon pedal there's plenty of adjustment here, including adding a high- or low-cut filter to tweak the sound of those repeats further.

Back to the dual delay functions, though, and the main delay (delay 1) time can be set by a knob or the tap tempo footswitch. Delay 2 is then automatically synchronised with it, dependent on which of the fivesubdivisions you select - triplet, eighth, golden ratio, dotted eighth or dotted quarter note. Delay 1 and delay 2 each have their own mix knob, so you can set the relative levels, and light or deep modulation can be added.

While the amount of repeats (feedback) is set universally with another knob, there is a secondary function - accessed by a process of knob twiddling while holding footswitches down - which allows independent feedback levels.

You can also disable synchronisation so Delay 2 is free-running, and with delay times that start from 20ms, you can use that to add chorus and flanging to the mix.

You can also set up series, parallel or ping-pong operation for the two delays - if you use both outputs rather than a standard mono signal chain, you'll hear the ping-pong effect, and get delay 1 and 2 coming out of separate outputs in parallel mode.

The DIG will do conventional delays if you turn delay 2 down, but the magic is in having two of them working perfectly in sync, serving up a world of rhythmic repeat patterns to explore.